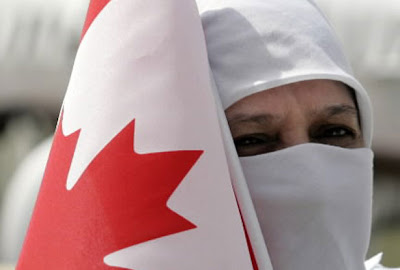 OH CANADA, SHARIA I BRING!
Question: What’s the difference between Hizb-ut- Tahrir and Al-Qaida? Outside of the fact that one uses overt terrorist violence directed against civil governments and their citizens in order to extract concessions and territorial gains, the answer is, very little. The end result is the same, blind allegiance by the Islamized population to the desert moon god and its vizier, Mohamed  KGS

OTTAWA – Islamists aim to build a “parallel society” in Canada that risks undermining its democracy and multiculturalism and becoming a “catalyst for violence,” warned a national security report published Monday.

The newly declassified document obtained by the National Post says Islamic hardliners are calling on Muslims living in Western countries to segregate themselves and adhere only to Shariah law.

“Even if the use of violence is not outwardly expressed, the creation of isolated communities can spawn groups that are exclusivist and potentially open to messages in which violence is advocated,” warns the report posted on the newspaper’s website.

“At a minimum, the existence of such mini-societies undermines the resilience and the fostering of a cohesive Canadian nation.”

According to the National Post, it was circulated internally after a Hizb-ut-Tahrir conference in Toronto last year on establishing an Islamic caliphate. “By definition, their world views clash with secular ones. A competition for the hearts and minds of the diaspora Muslims has hence begun,” the report concludes.