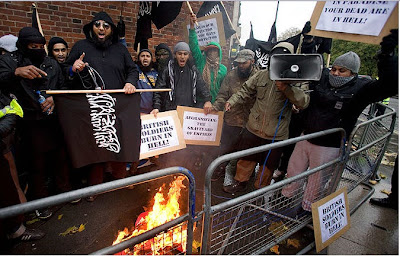 Why there weren’t any Muslims protesting these protestors is for you to decide, only the EDL were there to turn their back on them. Now there are people outside of mosques protesting their silence. Good for them. If that is what it takes to get these Muslim leaders out in the open to denounce this small handful of radical fundamentalists, all the better. KGS

A British imam says he is “deeply hurt” by demonstrations outside two mosques protesting the actions of a Muslim group that disrupted moments of silence during Remembrance Day services and burned models of poppies.

On Friday, a mosque in Portsmouth on the south shore of England, had a poppy painted on the front of the building. On Saturday, protests were held outside two mosques.

“It deeply hurts me,” Muhammed Muhi Uddin told the BBC. “If they [the protesters] talked to us then we would explain where we stand.”

While Uddin said every group has a right to be heard, “it’s a matter of respecting each other.”

He denounced the burning of poppies during Armistice Day ceremonies Thursday.

A group called Muslims Against Crusades (MAC) were behind protests. On Thursday during the two minutes of silence, group members chanted, “British soldiers burn in hell,” and held signs saying, “Islam will dominate” and, “Our dead are in paradise, your dead are in hell.”

MAC says it is “breaking the silence,” on its website. In an audio loop, voices chanting, ‘British soldiers, burn in hell” with the toll of a clock in the background is heard when the website is launched.

There are photos of children with the headline, “British soldiers kill one Muslim child every six hours.”