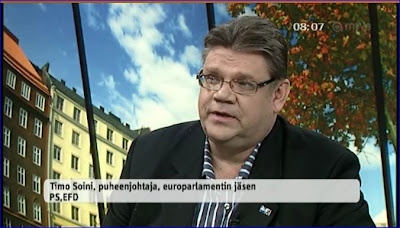 In response to the question about what to think of Greece’s announcement that it won’t be able to pay back it’s debt on time, and that Finland is expected to hand over millions to a failing Ireland, Timo Soini, spokesman for the True Finns party, whose party has extended its popularity to + 14% of the vote, responded in a MTV3 interview this morning on Finnish TV: “Did it come as a surprise? No it didn’t.”

He goes on further to add:

“When Greece was discussed earlier, it was clear then that Greece wouldn’t be able to pay back its debt. Now Ireland falls into the same hole, not as deeply, but it won’t survive without outside help. We should distance ourselves from Ireland. When the EU’s constitution was approved, we were told that it would bring jobs, I was there at the time. It was the West’s biggest brainwashing process. Now where are we? We were lied to then, and we’re being lied to now.

All three countries who are in trouble, Greece Portugal and Spain, are all EU monetary (Euro) members, and why, because the EU monetary system is political not about the economy. […] It’s not based on the free market economy nor does it work. The different economies  and their abilities are too different. It was a political decision to make the monetary union, and “political money” doesn’t work.

The interest rates are low in Sweden, in Denmark and in the UK, they are the ones that have their own money. A sensible economic policy should be formulated, whether it be inside or outside the EMU, but the whole time its being spun that there’s only one possibility, a monetary union. Such thinking isn’t possible without a fusion of politics, like finance politics, tax politics etc.. This has been the EU’s aim, towards a federalized European Union. This is a wrong policy.”

The drone MTV3 morning show host: “Why Timo Soini, is it wrong politics, why is harmonizing such a bad idea, a joint Europe, in which the welfare state is spread evenly?!”

Because sovereignty is the most important political value. So that Finns, in their own parliament, can decide all of their own issues. So now that we’ve come into this super state of Europe, we’re just floating along, then the finance minister is once again explaining why it has to be done like this, and then brings it before our parliament, but knowing full well why it was done. Greece should be thrown out of the EMU system, because Greece won’t survive no matter how much money you pump into it.

The only solution is for those countries in an economic crisis, should be returned to their own currencies. They should devalue 30%, and they should gradually climb themselves back into balance. Outside of doing that, nothing else will help.European-wide cooperation is needed, but the federation should be rejected. Only a common economic and free trade area would have a meaningful form of cooperation.

Sounds like good politics to the Tundra Tabloids, and only when other countries begin to take his words seriously, do we have a hope of breaking the EU altogether, because the politicians can’t be trusted not to try and re-invent another evil supra-state, because it’s in their DNA. KGS

THE EU BOSSMAN IS ALWAYS
TRYING TO GET OUR MINDS RIGHT 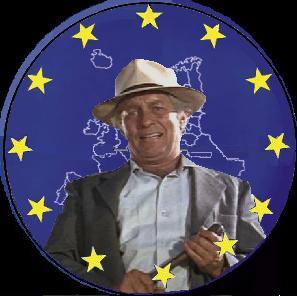 What we have here
is a failure to communicate
UPDATE: Fjordman sends the following:
Greek debt higher than expected, EU audit reveals
EUOBSERVER / BRUSSELS – Greece has incurred a much larger budget deficit and levels of public debt than the country had earlier estimated, EU audit figures revealed on Monday (15 November) morning, in an adjustment that could kick off another round of sell-offs not just in the Greek bond market but in those of other creaking eurozone peripheral states.
Pressure building on Ireland to seek EU help
The European Central Bank told Ireland on Monday (15 November) that EU emergency funds can indeed be used to bail-out its debt-ensnarled banks, adding to the pressure on the country to finally access a European rescue mechanism. Ireland continued to insist on Monday that it has no need of funding for government spending, but ECB vice-president Vitor Constancio said that a pool of monies set up by eurozone government for bailing out countries can be used for banks instead.