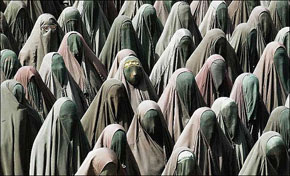 Boy, we’re sure glad we live in Saudi Arabia and not in Iran
The UN is a joke, a farce, a failed institution that mocks everything human rights and international law stands for. So folks, don’t be surprised that the U.N. awards Saudi Arabia over Iran the seat on the new U.N. agency promoting equality for women. It’s ludicrous. KGS

The United Nations on Wednesday rejected Iran’s bid for a seat to the board of the new U.N. agency to promote equality for women after fierce opposition from the United States and human rights groups to Tehran’s treatment of women.

But the U.N. accepted the bid of Saudi Arabia, which is also opposed by human rights groups.

Iran, which has been criticized for its record on women’s rights, received only 19 votes — short of the necessary 28 votes for approval.

In recent months, Iran sparked an international outcry by sentencing to death by stoning a woman convicted of adultery.

In Saudi Arabia, women are not allowed to drive and are barred from many facilities used by men.

The new agency was formed after a General Assembly resolution adopted in July merged four U.N. bodies dealing with women’s issues into one with greater clout to represent half the world’s population. The resolution calls for a 41-member executive board, with 35 members chosen by regional groups and six representing donor nations