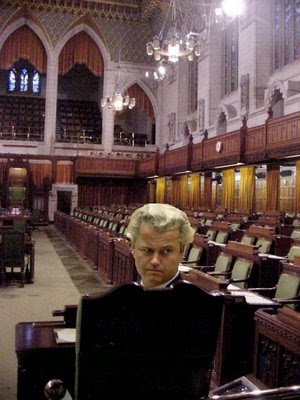 Hey Merkel, you copy cat,
you should at least give a hat tip!

From the excellent Sheik himself:

Freedom Party leader Geert Wilders says German Chancellor Angela Merkel is copying his politics. In an interview with German magazine Der Spiegel, the anti-Islamic MP said Chancellor Merkel is scared that a charismatic figure able to attract 20 percent of the vote will emerge in Germany.
Radio Netherlands
He said traditional parties feel threatened by his movement and that is why they are copying him. He pointed out that Dr Merkel recently declared Germany’s multicultural society a failure and CSU leader Horst Seehofer said he does not want any more Turkish or Arabic immigrants.
More here

UPDATE: Geert Wilders in hostile interview with Der Spiegel. The interviewer tries to trick the Dutch politician, by using a passage from the New Testament where Jesus is quoting a parable of the Ten Minas, to prove that “violent texts” are in all holy books. What a disgusting display of underhanded, bad journalism. Quoting Jesus who was quoting an ancient parable and then pretend that he meant it literally…..goes way beyond the pale. What a shmuck.

SPIEGEL: Are you familiar with this quote from the Prophet? “But these enemies of mine, who did not want me to be their king, bring them here and slay them before me”?

Wilders: I have read many such passages.

SPIEGEL: The Prophet cited in this case was Jesus, from Luke, Chapter 19, Verse 27. Do you admit that there are also calls for violence in the Bible?

Wilders: There are brutal passages in the Old Testament; the New Testament takes a more moderate approach. But a key difference between Christianity and Islam is that Muslims believe that the Koran contains verbatim the word of God; it is written in the imperative. This precludes a comparison with Christianity.

Wrt the update and the Bible, I can speak of the Old Testament. Yes, there are acts of violence, but for Jews (I can’t speak for Christians), the conquest of land is LIMITED to Eretz Yisrael and goes no farther. The Old Testament is not imperialist. It is nationalist.

The Torah was a model law for Jews in Eretz Yisrael.

By contrast, observing the behavior of Muslims over the centuries tells us that the Koran is a model law for the WHOLE WORLD.

As one observes the behavior of Jews, we see the establishment of a modern State of Israel in a small portion of land. Even in the worst-case scenario where Israel is labeled a “Theocratic State”, it is limited to a small tract of land with little territorial ambition.

As one observes the behavior of Muslims, we see the establishment of Sharia worldwide in far off places. This includes places which Muslims have never ruled (like the UK).

It should be noted that there are MANY Muslim nationalists. Algeria, Egypt, and Pakistan come to mind. While each country has territorial disputes, they are limited in scope. The conflict between nationalism in Muslim countries and pan-Islamism explains why there are so many terrorist attacks in these countries committed by pan-Islamists.

TINSC, that was very much appreciated. KGS