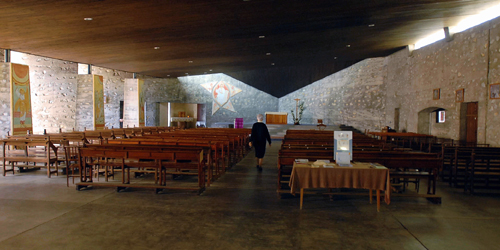 Boy this needs to be disseminated far and wide, like Vlad said, imagine what would happen if the situation was reversed? KGS

H/T Vlad Via: Jano, from Bivouac

Carcassonne: The faithful during Mass stoned

Sixty faithful who attended Tuesday night’s Mass for the dead (All Saints Say) in the church of Saint-Jacques in the district of Viguier Carcassonne, have been targeted by stoning which also damaged a statue of the Virgin at the entrance of building. Two youngsters of the 13 or 14 years came in during the mass and threw stones and pine cones  before being put to flight by a worshipper who tried to capture them but could not catch up.

“This is serious, it’s a real desecration,” said the abbot Garrouste serving of the parish, which celebrated Mass this evening. A complaint was filed this morning in Carcassonne. A complaint was lodged by the police, which is taking the case very seriously. The desecration of the Saint-Jacques church and the stoning of the parishioners during a public service, is a first in this ghetto and caused a big stir in the Christian community.

UPDATE: From Vlad Tepes and Islam in Europe

The Crown prosecutor of Carcassonne Francis Battut has ordered an investigation to identify the teenagers “we take this very seriously” he said.

The facts date from Tuesday, but were not divulged until Thursday. “We ignore the motivation from these youths” said Abdallah Zekri who is representative of the French Council of the Muslim faith, and has condemned this as “a truant attitude”. The profanity of the Church St. Jacques and the stoning of the believers in the middle of mass, a first in a difficult neighbourhood, has triggered a great deal of emotion within the Christian community.