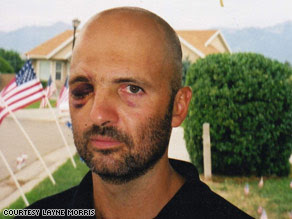 “Former Army Sgt. Layne Morris, who lost an eye in the firefight that captured Khadr, said he was concerned that an eight-year sentence put the Canadian “on frankly the fast-track to freedom” and “the prime of his life.”
Layne Morris is right, jihadi Khadr has been placed on the fast track to freedom and an eventual suicide-homicide run against the infidel. A numerous amount of former Gitmo jihadi inmates have returned to the fight and there is not one person who can reasonably assure us that this dirtbag won’t do the same. 40 years wasn’t enough, that it was reduced to 8, is a travesty of justice. KGS

GUANTANAMO BAY NAVY BASE, Cuba — A military jury on Sunday gave teen terrorist Omar Khadr a 40-year prison sentence for killing an American commando in Afghanistan, but the sentence was merely symbolic — the United States already had agreed to limit Khadr’s prison time to eight years, and Canada last week said it would allow Khadr to serve the bulk of his sentence there.

Canada had been cagey in public about its agreement to the deal, under which Khadr pleaded guilty to war crimes. But the military judge at Khadr’s trial on Sunday released an exchange of diplomatic notes between the U.S. and Canadian governments that included Canada’s assertion that it “is inclined to favourably consider Mr. Khadr’s application to be transferred to Canada to serve the remainder of his sentence” or whichever portion Canada’s National Parole Board decides is required.

The note was signed by the Canadian Embassy on Oct. 23, with no name attached.
That agreement will allow Khadr to be released from prison by age 32, if not earlier under Canadian parole provisions.

Khadr, 24, looked straight ahead when the jury foreman announced the 40-year sentence. The widow of his victim, Tabitha Speer, 40, cheered “yes,” and then wept.

“He will forever be a murderer my eyes,” Speer said.

The 40-year sentence, even though it will never be enforced, provided a sense of finality, she said — along with assurances that Khadr would never be allowed to enter the United States or ride on an airplane.

The seven-officer jury was unaware that Khadr’s sentence had already been set before they began deliberating Saturday.

Jurors were told only that Guantánamo’s youngest captive had pleaded guilty to five war crimes, including hurling the grenade that mortally wounded Sgt. 1st Class Christopher Speer, 28, during a July 2002 assault on an al Qaeda compound. Khadr was 15.

In a rebuke, the jury said he should be imprisoned until age 64.

The Toronto-born Khadr also admitted that, in the days ahead of his capture, he planted mines intended to maim or kill U.S. and allied forces. He was captured near dead, treated by U.S. forces and sent to Guantánamo soon after his 16th birthday.

The Pentagon’s Chief War Crimes Prosecutor, Navy Capt. John F. Murphy, said he made the eight-year plea deal with Khadr to secure the certainty of a conviction for the victims of the so-called “child-soldier.”