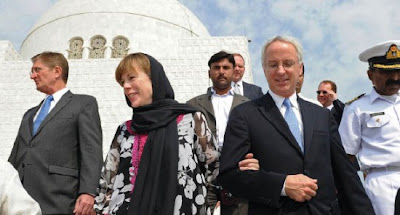 The Tundra Tabloids can’t remember how many times it’s mentioned the nonsense of a non-woman donning a hijab while visiting, staying in a Muslim country or even while visiting a mosque. There is no need for a Christian, Jew, Hindu etc. to wear an Islamic prayer scarf, and that’s a fact. The hijab is solely a religious article for prayer that must be worn by an adherent to that ideology in performance of their religious requirements. A non-Muslim donning such an article is then participating in the Islamic belief/political system, something that they shouldn’t be forced into doing. That’s the fact. KGS

US Envoy visits Faisal Mosque with his wife

The vice president of IIUI, Parveen Qadir Agha expressed her profound gratitude over ambassador’s first ever-official visit to the Faisal Mosque, declaring it as a good omen.

At the conclusion of the visit, the American ambassador was presented with shield of Dawaa Academy, and a volume of Islamic publications, by the Mosque khateeb and director Dawaa Academy, Professor Dr. Sahibzada Sajid-Ur-Rehman.

Here’s Westerner who gets it, and refused to wear one while visiting Afghanistan