Skip to content
Home
/
2010
/
October
/
21
/
Uncategorized
/
JIMMY SCHMOOZING WITH HOMICIDAL ISLAMONAZIS IN SYRIA …….
Facebook
Twitter
Google+
LinkedIn
Pinterest
This fecal head is arguably the worst ex-president in the history of the US, who seems intent on setting new lows for himself and his all important “legacy” by chumming it with Islamonazis…. 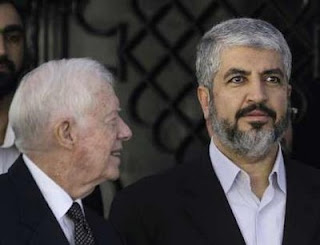 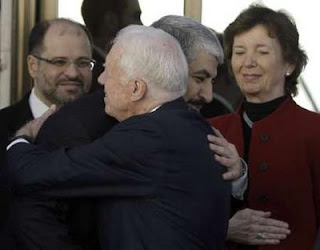 DAMASCUS, Syria –Former President Jimmy Carter said Tuesday that Palestinians are “living in a cage” in Gaza and that the militant group Hamas must be included in all major efforts for peace.
Carter was in Syria with an international group of veteran statesmen known as the Elders, which includes Ireland’s former President Mary Robinson.
“We believe that Hamas should be included in all the major efforts to peace … It is part of the Palestinian people,” Carter said. He added that “1.5 million Palestinians are held in a cage or prison while their human rights are taken away.”
Israel imposed its blockade of Gaza, a densely populated coastal strip along Israel’s southwest border, following Hamas’ violent takeover in June 2007. The rival Palestinian faction Fatah, led by Western-backed Palestinian President Mahmoud Abbas, controls the West Bank.
Carter’s remarks came as reconciliation talks between the two Palestinian factions were postponed Tuesday.
Deep divisions among Palestinian groups remain. On Tuesday, nine Damascus-based groups that oppose Abbas denounced his recent comments, which said Palestinians would be willing to end all historic claims against Israel if a Palestinian state is established on lands captured by Israel in the 1967 Mideast war.
The factions, including Hamas and the Islamic Jihad, said such remarks “pose a dangerous violation of all Palestinian rights.”
MORE HERE.