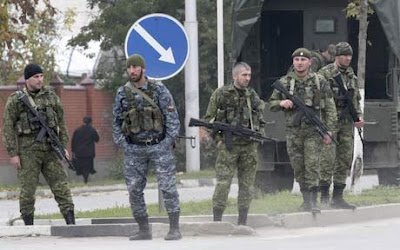 And the beat goes on. The jihad continues in Chechnya with four jihadi Islamonazis going in full blaze, but the think tank wonks will describe it as a desperate act of a  people left with no other means available to get their political agenda into being. Nonsense. If these thugs had real weapons and a real military, the only difference would be the size and scale of their jihadi terrorism. They do not operate within the confines of non-Islamic international law.  KGS

Initial reports said a small group of three or four gunmen burst into government buildings, opening fire with automatic weapons.
Unnamed law enforcement sources told Russian news agencies that two of the militants had blown themselves up, killing four security guards.
Russian police sources later told the Associated Press that all the militants had been killed, along with two others.
The incident occurred as Rashid Nurgaliyev, the Russian interior minister, was visiting the Chechen capital though he was reported to be nowhere near the scene at the time of the attack.
Russian news agencies reported that automatic weapons fire could still be heard inside the parliament complex late on Tuesday morning and that Ramzan Kadyrov, the Kremlin-backed head of Chechnya, was personally leading the operation to “neutralise” the militants.
The brazen attack will undermine the Kremlin’s oft-repeated claim that stability has been brought to Chechnya thanks to Mr Kadyrov who human rights groups accuse of heading a brutal local regime that has only served to inflame Islamist extremism.
MORE HERE.