Skip to content
Home
/
2010
/
October
/
15
/
Uncategorized
/
POSSIBLE ISLAMIC HONOR MURDER IN UK AS LIT WOMAN IS PRONOUNCED DEAD…….
Facebook
Twitter
Google+
LinkedIn
Pinterest
It’s great that the police are treating the death of the woman as “suspicious”, but will they carry it through and deem it an Islamic inspired honor killing if the evidence proves it to be one? KGS 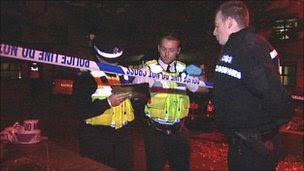 H/T: Scottish Infidel
Woman dies in Bradford after being found on fire
A 23-year old woman has died after she was found on fire behind a house in Bradford, police have said. West Yorkshire Police and fire crews were called to a property on Cloudsdale Avenue, south of the city centre, at 1915 BST on Thursday. A force spokesman said the woman, who was found “alight”, was pronounced dead at the scene. Police said the death was being treated as suspicious and forensic science experts remained at the scene.
A post-mortem examination is to take place later.
[…]
On Friday, two police officers were at the scene where several houses were taped off at the end of the street. Aziza Kahn, who lives nearby, said she believed the woman was pregnant and lived at the property with her husband, mother-in-law and two sisters-in-law. She said: “We never saw her. There was a time we were quite close to that family, but not now. “We didn’t know her, we never got to talk to her. “You never saw her with her husband, never ever saw them together. “She was a young girl, we thought she was about 17 or 18, and she was pregnant.”
Read it all here.