Skip to content
Home
/
2010
/
October
/
15
/
Alexander Stubb
/
FINNISH FM STUBB SAYS THE ANTI-WEAPONS BLOCKADE ON HAMASTAN MUST END.
Facebook
Twitter
Google+
LinkedIn
Pinterest
So what’s stupid going to do once the mass importation of big weapons into Gaza gets going, look the other way? Yep.

In order to understand the thinking of the current Finnish FM (who for the most part, is more Israel friendly than his stalinist predecessor, Erkki ”Ol’Scruffy” Tuomioja, who recently signed the Finnish branch of the ICAHD’s petition for the Finnish government to end it’s weapons contracts with Israel. The ICAHD is a radical organization of extremist Leftists who view everything that the Jewish state of Israel does in defending itself, as a war crime.) you have to understand that he has a EU first mentality.
Alexander Stubb, while he may make sound proposals now and then, he is first and foremost, a EU cheerleader, a Finnish Foreign Minister second. No matter how counterproductive the policy decided upon, if the majority of the EU promotes it, you know, the big guys like France, Germany, England etc., then Stubb will be sure to follow suit, though he most undoubtedly knows better. Like the TT said, as far as his predecessor goes, he’s the better of the two, but not by much. His call for the end of the anti-Weapons blockade that both, Israel and Egypt, have placed against the Hamas run Gaza Strip, is indicative of his EU first mindset, as well as the nonsense foreign policy of the EU in regards to how Israel defends itself.
Trust the TT when it says that, if the Europeans were facing the exact same existential threat that Israel faces, it’s attitude towards an anti-weapons blockade would be entirely different. That’s a fact, and no European can state otherwise and be taken seriously. KGS 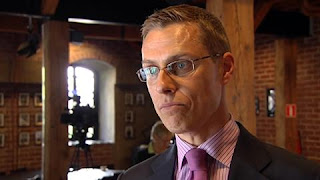 YLE: Finnish Foreign Minister Alexander Stubb Thursday expressed the hope for more action to improve conditions in occupied Palestinian areas. Visiting Gaza, Stubb said that the EU is aiming at a complete dismantling of the current blockade.
The main purpose of the visit was to gain an impression of the humanitarian situation in the Gaza Strip. The Finnish Foreign Minister met with representatives of a number of aid organizations working in the area.
Stubb thanked Israel for easing the Gaza blockade in June. At the same time, however, he stressed that more moves are needed.
Foreign Minister Stubb described the situation in the Gaza Strip as continuing to be alarming.
“It is especially important that exports from Gaza be allowed so that the area’s economy can develop,” said Stubb.
“The goal of the EU is a complete lifting of the blockade. However, the EU also understands well the concerns of Israel connected with its national security,” Stubb stated with an allusion to repeated rocket attacks against Israel launched from Gaza.
Foreign Minister Stubb also delivered an appeal for the immediate release of the Israeli soldier Gilad Shalit who was kidnapped in 2006.