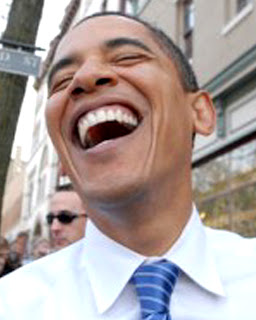 OBAMSTER: SO WHAT?!
In what alter universe is the current administration inhabiting? If the wind is blowing in the right direction and if one listens closely, the sound of Osama Bin-Laden and his Taliban cohorts can be heard all the way from a dark cave in the northern regions of Pakistan. KGS

Last month, I reported exclusively at PJM about video showing al-Qaeda cleric Anwar al-Awlaki leading prayers on Capitol Hill for Muslim congressional staffers and officials for the Council on American-Islamic Relations (CAIR). Sitting beside now-convicted terrorist (and former CAIR communications specialist) Randall “Ismail” Royer in the video was Congressional Muslim Staff Association founder and former president Jameel Johnson. Also present was Nihad Awad, CAIR’s executive director.
But a recent New York Post article about how Johnson’s former employer, Rep. Gregory Meeks (D-NY), complained to Homeland Security in 2006 about the questioning of another al-Qaeda-linked cleric, Anwar Hajjaj, stated that Hajjaj was then leading prayers for the Muslim staffers on Capitol Hill.
In fact, Meeks invoked Hajjaj’s continued presence on the Hill to demonstrate that he was a “highly regarded” Islamic scholar:

Meeks described Hajjaj as a “highly regarded” professor of Islamic studies who leads Friday Muslim prayers at the Capitol.
Meeks said Hajjaj was “a pioneer in distance-based learning of Islam” through the American Open University in Virginia, according to a copy of the Sept. 30, 2006, letter to Chertoff, which was obtained by The Postunder a Freedom of Information Act request.

At the time that CMSA was hosting a second al-Qaeda cleric, it was being lauded by the New York Times as a voice of moderation on Capitol Hill.
The NY Post article states that Meeks became aware of Hajjaj’s plight through Johnson, who was then Meeks’ chief-of-staff. As I reported here at PJM in December 2007, Johnson arranged — under the auspices of Meeks’ congressional office — an Islamic conference that was cancelled at the last minute by the House sergeant-at-arms because of the terrorism ties of the invited speakers. In January 2008, Jameel Johnson was appointed associate vice president of government relations for NASDAQ.
Why the scrutiny by Homeland Security for CMSA’s Capitol Hill prayer leader?
Anwar Hajjaj was the long-time head of an Islamic charity, Taibah International Aid Association, which the U.S. government identified as an al-Qaeda fundraising arm in May 2004 and designated as a terrorist organization. The UN also designated Taibah as a terrorist organization.
MORE HERE
H/T Zip