Skip to content
Home
/
2010
/
October
/
11
/
Uncategorized
/
GERMAN MINISTER WARNS OF REVERSE DISCRIMINATION…….
Facebook
Twitter
Google+
LinkedIn
Pinterest
The day the German government released the statement that Islam belongs to Germany, the Tundra Tabloids was sitting in a Berlin café drinking a coffee as a German friend showed the headline of that day’s paper. I don’t remember which paper it was.
For the multi-culti self anointed ‘political elite’, it suffices for them to say that multiculturalism, and I mean all aspects of it, is all good, and those that beg to differ, well, they are all bad. No wait, what they really imply is that their critics are all Nazis, waycists and bigots. Well here comes along a person(s) who beg to differ from that rosy view.

The same observations have been reported in Sweden and in Norway as many Tundra Tabloids readers can attest to, the phenomenon is the same, once an area becomes under Muslim control, and the natives who still insist on living there, especially in schools, are treated terribly, in the most racist of ways, with even beatings becoming an habitual form of anti-native expression. The theme is a common one. Read up. KGS 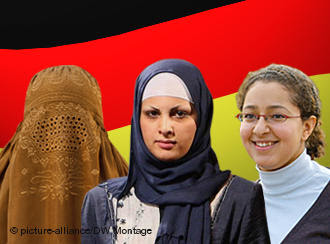 Family Minister Kristina Schroeder warned over the weekend that many ethnic Germans have been the brunt of discrimination by foreigners living in Germany.
Schroeder made her comments Sunday on public television, saying that “German children and teenagers are being (verbally) attacked because they are German.”
“Anti-German sentiments are a form of xenophobia and racism,” Schroeder said. “Here, someone is being discriminated against because he or she belong to a certain ethnic group,” the minister said.
Schroeder added that the problem was common on some school playgrounds and on public transportation.
Schroeder’s remarks followed strong words over the weekend by Horst Seehofer, the state premier of Bavaria, who said on Saturday that Germany should not accept any more Muslim or Arab immigrants.
On the heels of Turkish Prime Minister Recep Tayyip Erdogan’s meeting with Chancellor Angela Merkel in Berlin, in which the German leader reiterated that negotiations for EU membership for Turkey remained “open-ended with no guarantees,” Seehofer called for excluding some groups of immigrants from Germany.
“It is clear that immigrants from foreign cultural circles, like Turkey or Arabic countries, have a hard time,” he told the weekly news magazine Focus. “That leads me to the conclusion that we do not need any more migrants from other cultural circles.”
At a regional party conference, Seehofer also declared that the Green party’s concept of multiculturalism had failed. “Reality has taught us multi-culti is dead,” he said.
More here