Skip to content
Home
/
2010
/
October
/
6
/
Uncategorized
/
GAY SAUDI WHO GOT ROWDY CAUGHT ON VIDEO ATTACKING HIS SEX SLAVE…….
Facebook
Twitter
Google+
LinkedIn
Pinterest
The man is worse than an animal. How many times have we seen these extremely rich Saudis using people as beasts of burden, whether it’s to clean their homes or to provide sexual gratification? It’s another reason why the West should stop funding these people, who have wealth but never really earned it, and spend their time engaged in over the top lifestyles, then fund Wahabbists and jihad to convert and submit the West in order to ease their consciouses. KGS
H/T The Baron
UPDATE: Here is the two of them on LiveLeak 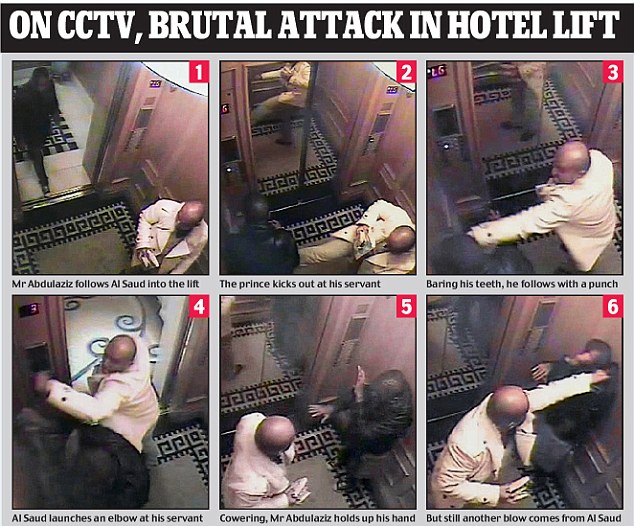 A Saudi prince beat his man servant lover to death in a ‘ferocious’ sexually motivated attack at an exclusive London hotel, the Old Bailey heard yesterday.

Saud Abdulaziz Bin Nasir Al Saud, the grandson of the billionaire king of Saudi Arabia, murdered Bandar Abdulaziz after subjecting him to weeks of physical and sexual abuse, the jury was told.

The royal allegedly downed champagne and six Sex on the Beach cocktails before repeatedly punching his 32-year-old aide in the head, knocking out teeth and leaving him with severe brain injuries in the suite they shared at the five-star Landmark Hotel in Marylebone.

He also strangled Mr Abdulaziz with such force that he fractured bones in the servant’s neck and bit him on both cheeks in way that clearly had a ‘sexual connotation’, the court heard.

Al Saud, 34, allegedly tried to ‘cover his tracks’ by cleaning up blood from the attack before raising the alarm. He was said to have at first told police Mr Abdulaziz had suffered the injuries in a robbery.

The prince later changed his story and admitted killing his servant, but he denies murder and one count of grievous bodily harm with intent.

The pair arrived in London in December last year for the final leg of an extended world holiday. They had visited Prague, Milan, Marrakesh and the Maldives, apparently using the Spartacus International Gay Guide as a travel planner.

Al Saud enjoyed a party lifestyle in the capital, rising late and spending the afternoons shopping before eating out and going to nightclubs until the early hours.