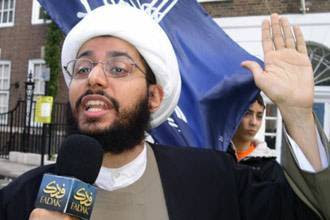 DUBAI (Al Arabiya)– The Kuwait government asked Interpol to arrest and hand over an exiled Shiite man after it had stripped him of citizenship after remarks he made about prominent Islamic figures, Kuwait’s Al-Anba newspaper reported.
Kuwait resorted to the Interpol one day after issuing a resolution to withdraw the Kuwaiti citizenship from Yasser Habib, who made derogatory statements about Aisha, Prophet Mohamed’s wife and several of the prophet’s companions, the rding to the newspaper reported on Tuesday.
The Kuwait government said it revoked Habib’s citizenship because he holds a British passport, something it described as against the laws of Kuwait. The decision was welcomed by Kuwaitis inside and outside the country. It did not mention the move had anything to do with Habib’s statements against the prophet’s wife.
If arrested, Habib would face charges of “deriding religious symbols and sowing the seeds of sedition among Kuwaitis, and inciting sectarian strife,” said Minister of State for Cabinet Affairs Rawdan al-Rawdan in a statement.

And how did he “insult” Aisha? He claimed she was not a six-year-old child when she married Big Mo, instead she was much older and this is child-bride myth was being used by Christians and Jews to insult Islam. No really, I’m not making that up…
H/T:ROP

NOTE from the TT: The late ayatollah Khomenie would also have a bone to pick with this imam, for the ayatollah himself married an underage girl, raped her like his ancient prophet did to Aisha, then wrote poetry about it.

So periodically, these both groups of Sunni and Shi’a blame, point the finger at each other for pedophilia, but but defend it as well as having strict Koranic/Islamic foundations. Sick