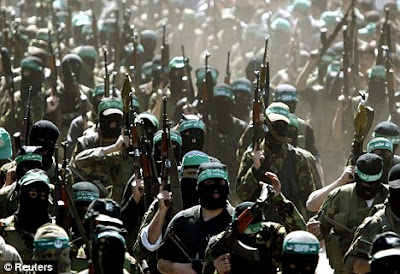 HAMAS: Those who fight Islamic inspired terrorism
will be brought to Islamic inspired (in)justice
Fighting terrorism in the Arab controlled areas of Gaza and Judea and Samaria comes at a cost, and no one better than that, than the son of one of the founders of Hamas, Mosab Hassan Yousef. KGS
ArabNews.com GAZA CITY: Hamas announced Thursday that its security forces have uncovered and arrested a number of collaborators who participated in missions for Israeli intelligence services.
Ihab Al-Ghussien, a spokesman for the Hamas-run government’s Interior Ministry declined to reveal the names of the collaborators, but said they include women. At a news conference in Gaza, Al-Ghussien said: “The occupation (Israel) failed to transform Gaza into a quagmire of collaborators … the internal security apparatus achieved a significant success in this matter and managed to direct a big blow for the occupation.”
Those found guilty face possible execution.
Al-Ghussien said: “The collaborators had a clear role during the last Israeli war on Gaza. They were providing the Israeli Army with information about the resistance fighters and their homes, which were targeted during the war.” He was referring to the 2008-2009 war in which 1,400 Palestinians and 13 Israelis were killed.
More here.