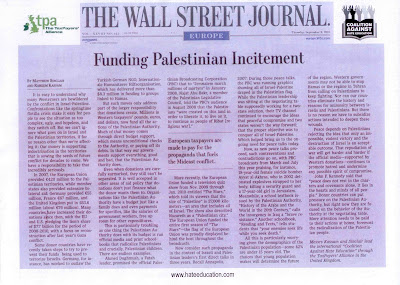 This is an issue that the Tundra Tabloids has returned to time and again, the dumping of hundreds of millions of dollars into the black holed swamp called the ‘Palestinian Authority. The question never asked of course, is why the money just never seems to translate into a decrease of international assistance, why is it that they’re always perpetually in need of more funding?
Another question that’s left off the discussion table, is the troubling fact that the aid money always leads to a spike in the violence directed against Israel. Take a look at the graph immediately below that was published at the TT back in 2007, (h/t Solomonia), it shows that homicides lag one year behind donor aid. 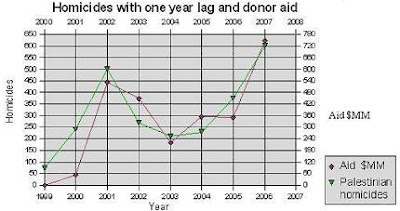 The funding helps the Palestinian Authority to carry out its continued policy of planning, promoting and funding anti-Israel and anti-Semitic rhetoric, as well as funneling money to Hamas in violation of US and EU laws prohibiting any such funding. KGS

Funding Palestinian Incitement
In 2007, the European Union provided €420 million to the Palestinian territories, while member states also provided extensive bilateral aid: Germany provided €55 million, France €67 million, and the United Kingdom put in £63.6 million (about €76 million). Many countries have increased their donations since then, with the EU and U.S. pledging the lion’s share of $7.7 billion for the period of 2008-2010, with a focus on reconstruction after last year’s Gaza conflict.
Some donor countries have recently taken steps to try to prevent their funds being used to terrorize Israelis. Germany, for instance, has worked to outlaw the Turkish-German NGO, Internationale Humanitaere Hilfsorganisation, which has delivered more than $8.3 million in funding to groups linked to Hamas.
But such moves only address part of the larger responsibility that donations create. Millions in Western taxpayers’ pounds, euros, and dollars, now fund all the actions of the Palestinian Authority. Much of that money comes through direct budget support, which means unconditional checks to the Authority, or paying off its debts. In that way our governments support everything, good and bad, that the Palestinian Authority does.
MORE HERE.