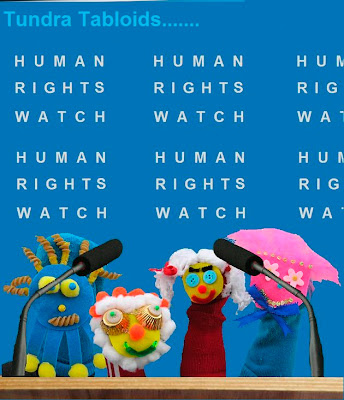 HRW Sock puppets: From
George’s hand to our mouths
The enemies of good and truth do not rest for a moment, George Soros is a menace and an unrepentant kapo, meaning, a Jewish collaborator with the Nazis, and therefore a traitor of the Jewish people. Canadian, Ezra Levant ran a post about the traitor Soros, exploring his twisted mindset that till this day, refuses to accept any moral responsibility for his actions.
So how fitting it is that HRW accepts money from this creep, they join the ranks of many other fake human rights groups that hate Israel, the US and free market capitalism, including a long list of US Democrat politicians, …like Obama. KGS
Soros Bailout of HRW Highlights Moral Crisis
NGO-Monitor: Jerusalem – A $100 million “challenge grant” from George Soros to Human Rights Watch (HRW) will not contribute to universal human rights, but will instead allow expansion of the biases and ideologies that have severely damaged this organization’s reputation, notes NGO Monitor, a Jerusalem-based research institution.
“Human Rights Watch was founded to promote a noble moral mission, but unfortunately acts in a very immoral manner,” says Professor Gerald Steinberg, president of NGO Monitor.  “HRW claims to be ‘even-handed’ and to publish ‘credible reports,’ but this is contradicted by highly biased activities in the Middle East, particularly on the Arab-Israeli conflict.  Time and again, HRW reports on Israel are based on false or unverifiable claims, and the analysis strips away the context of the conflict, denying Israelis the right to self-defense. George Soros has supported this travesty.”
NGO Monitor’s monograph, Experts or Ideologues: Systematic Analysis of Human Rights Watch, demonstrated a consistent anti-Israel agenda within the organization, as shown in detailed analysis of the publications in the Middle East and North Africa from 2002 to 2009. This report showed that MENA division director Sarah Leah Whitston and her deputy, Joe Stork, as well as other officials, come from backgrounds in anti-Israel advocacy, rather than human rights and international law.
These biases, which are particular to the Middle East and North Africa (MENA) division, have intensified at HRW. In May 2009, Whitson went to Saudi Arabia to raise funds, selling the message that HRW’s role is central in countering “pro-Israel pressure groups.”  Whitson also emphasized HRW’s anti-Israel reporting on the Gaza war, which provided the foundation for the one-sided Goldstone report, as the basis for donations from Saudi funders.
This and other scandals under the leadership of Ken Roth (since 1993), including the Garlasco affair that led to the firing of HRW’s “senior military analyst,” alienated many core HRW donors, and created the crisis and the need for a bailout from Soros.
In October 2009, HRW founder Robert Bernstein published an op-ed article in the New York Times, Rights Watchdog, Lost in the Middle East which denounced the biases and failures of his own organization. Bernstein reiterated NGO Monitor’s finding of obsessive focus by HRW on false allegations against Israel, while de-emphasizing daily human rights violations in Iran, Libya and other authoritarian regimes. Bernstein noted that instead of using its growing resources to press for human rights under these regimes, his organization has focused on turning “Israel into a pariah state.”  In 2010, research reports in The New Republic and Sunday Times exposed more of HRW’s failures and further reduced its moral reputation and influence.
“Founder Bob Bernstein’s denunciation of his own organization’s moral betrayal highlights the deep bias and lack of credibility at HRW, particularly in its MENA Division,” Steinberg adds.  “Following the reports about Mr. Garlasco’s Nazi memorabilia collection, HRW pledged an independent review all of the reports he had issued.  We are still waiting for this; all of his reports must be seen as without merit until otherwise demonstrated.”
“The blatant anti-democratic and anti-Israel ideology permeates the organization,” Steinberg continues.  “Ms. Whitson’s fundraising trip and rhetoric reflect an organization that from 2004 – 2006 issued 300 percent more criticisms of Israel than of Saudi Arabia.  Additional funding without basic changes in the organizational culture and personnel at HRW will only deepen the crisis. If HRW’s incoming board chairman James Hoge Jr. is serious about restoring this moral influence, he will have revamp the organization from the ground up, particularly related to the Middle East.”