Skip to content
Home
/
2010
/
September
/
7
/
Uncategorized
/
ANOTHER UPPITY DHIMMI RUNS AFOUL OF ISLAMIC SUPREMACISM IN INDONESIA AGAIN…….
Facebook
Twitter
Google+
LinkedIn
Pinterest
How dare a dhimmi question a Muslim. People intending to live in a Muslim country but are not acquainted with Islam, better think again. Remember folks, Indonesia is one of the often sited examples of a “moderate Muslim country”, and yet a Westerner who asks what kind of Muslims he’s dealing with, has to run for his life and then arrested by the police to in jail for his troubles.
Islam is a supremacist ideology and saying so, in spite of being called “insensitive” or an “Islamophobe”, is an act of common sense and a public service. That’s why Koran burning is a must, these Muslims believe that no one can dare criticize Islam or Muslims, especially the non-Muslim, like these two individuals in the article. Next time you hear something about a Koran burning, think about these two Westerners sitting in jail for insulting Islam and Muslims just because they had enough and spoke their minds. KGS 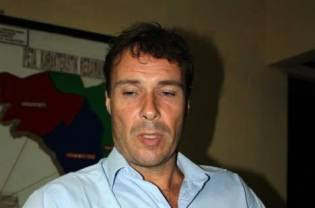 Stephen Alexander: I didn’t know about my dhimmi status
before opening my mouth to these Islamic supremacists

A Second Villa Trashed in Lombok after Alleged Insult to Islam

Lombok. A second foreigner residing on Lombok Island in Indonesia has found himself the object of local wrath for allegedly defiling Islam during the fasting month of Ramadan.
Locals from Sidemen village on Lombok’s main tourism area of Senggigi told the Jakarta Globe on Tuesday that hundreds of residents had attacked and wrecked a villa belonging to a German national and torched his motorcycle for blaspheming Islam.
Police identified the man as Stephen Alexander, 35, also known as Abu-Can Peter.
Mustan, a local, said Alexander discovered that a vandal had decapitated one of the statues in front of his villa on Monday evening and took the severed head to the home of village chief Amalsah.
“He came carrying the statue head and got angry at the village chief, accusing the villagers of damaging his statues.”
Alexander threatened to report the vandalism to the police if Amalsah could not find the vandal within two weeks, Mustan said.
He said villagers had just finished tarawih (evening prayers during Ramadan) and were insulted when Alexander demanded to know, “What kind of Muslims we were?”
“His words were deeply hurtful.”
As Alexander fled for the forest, the enraged villagers trashed the resident’s villa and burned his motorcycle.
Alexander, who has lived in the Lombok for ten years and is married to an Indonesian, only emerged from the forest when police arrived. They promptly arrested the expatriate and are holding him in protective custody at Senggigi Police headquarters.
Luke Gregory Lloyd, 64, meanwhile, is facing the prospect of six years in jail after he was charged with blaspheming Islam and immigration violations after disrupting a late-night Koran recital in a mosque near his house in Kuta, Lombok, on Aug. 22.
Police allege the American expatriate barged into the prayer session with his shoes on, unplugged a microphone and may have even assaulted one of the worshippers.
Lloyd, whose home was also trashed, denies the charges.