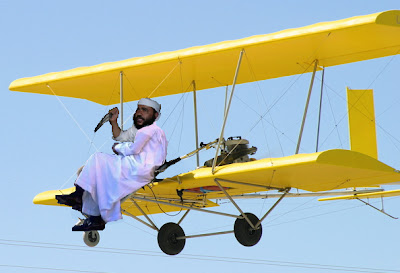 Now this is going to be interesting. This latest change in tactics points to the success of Israel’s and Egypt’s weapons blockade of Hamastan/Gaza. Remember folks, this has nothing to do with “aid” and everything to do with ensuring that Hamas has a steady supply of weaponry. While it may not be the aim for many of those useful stooges helping to break the blockade, in practice, they’re doing exactly that. KGS

NOTE: Is CAIR involved in anyway?
US group says it plans to send plane to Gaza

BETHLEHEM (Ma’an) — A pro-Palestinian group based in the US will send a plane loaded with aid to the Gaza Strip in defiance of Israel’s air and sea blockade, an official said Sunday.
“We intend to send an aircraft to Gaza in much the same way boats were used — without going through Israeli or Egyptian airspace,” said Paul Larudee, an organizer with the California-based Free Palestine Movement sponsoring the flight.
Authorities in Gaza are supportive of the initiative and are working to locate a landing site, Larudee said. Gaza’s now-defunct Yasser Arafat International Airport is not being considered, he said.
In the meantime, Free Palestine Movement officials will look for a plane designed for rough landings and takeoffs such as those used in Alaska and other locales lacking proper aviation facilities, Larudee said. The plan is to send a light aircraft equipped with material sometime in the spring of 2011, after the next sea voyage.
“Breaking the blockade by air may be even more feasible than by sea. An aircraft cannot be boarded while in flight, and the right aircraft can land almost anywhere in Gaza,” a statement on the group’s website says.
More here.