Skip to content
Home
/
2010
/
September
/
5
/
Uncategorized
Facebook
Twitter
Google+
LinkedIn
Pinterest
Like the Tundra Tabloids has been saying for years, the Neo-Nazis (read =Fascists and National Socialists) are not against Muslims, but find kindred spirits with them, as well as their co-socialist buddies in the SDP and hard Left. Nothing like clarity to the situation, calling the philosemitic /pro-Israel Vlaams Belang and Geert Wilders’ PVV party,… “fascists” rings more hollow with each day’s passing. KGS 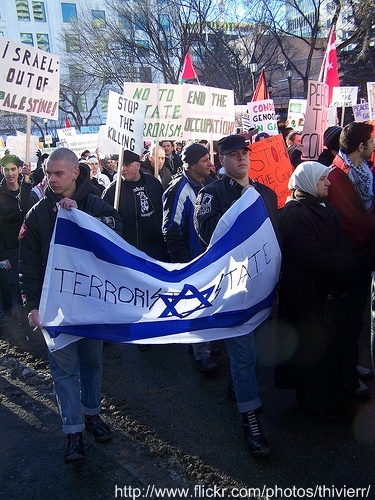 Neo-Nazis marching in an anti-Israel protest
Pro-Israel groups protest Berlin al-Quds Day march
Head of German-Israeli Friendship Society: “Neo-Nazis use solidarity with the Palestinians as agitation against Israel, the only free democracy in the Middle East.”
BERLIN – Pro-Israeli organizations, Jewish community leaders and a representative of the Iranian opposition in Germany assembled in the heart of downtown Berlin’s bustling shopping district on Saturday to protest against an Iranian backed al-Quds Day march.
Jochen Feilcke, the head of German-Israeli Friendship Society in Berlin and Potsdam, criticized the “glorification of the Islamic Republic of Iran” by the al-Quds participants.
“Once again, the participation of neo-Nazis and other sympathizers of the mullah regime is expected and their goal is clear: Expressions of solidarity with the Palestinians will be used as agitation against Israel, the only free democracy in the Middle East,” Feilcke said.
The al-Quds demonstration has been an annual event in Berlin since 1996 and advocates the destruction of the Jewish state. Ayatollah Ruhollah Khomeini established al- Quds Day in 1979 and it is now marked in the Islamic Republic and throughout the Arab world by calling for the abolition of Israel.
“These are people who only accept veiled woman, punish homosexuals, persecute political opponents and want to live according to Shari’a,” Maya Zehden, a spokeswoman for the Berlin Jewish community, said of the al-Quds Day protesters.
The “forces hostile to democracy, like radical leftists and rightist as well as religious fundamentalists, are marching with one goal: The destruction of Israel,” Zehden said.
“The people who call themselves peace activists” have aligned themselves with the anti-Israeli extremists, she said.
“Jewish institutions are receiving more threats in the meantime from… people from the Middle East [German Muslims] than from right-wing extremists,” Zehden said, addressing rising Islamic anti- Semitism in Germany.
“We expect our politicians to not allow themselves to agitate against Israel,” she said, in a reference to the Bundestag’s resolution slamming Israel for seizing May’s Gaza flotilla.
Zehden called on the German government to to clarify its foreign policy and engage in a debate about integration.
More here.