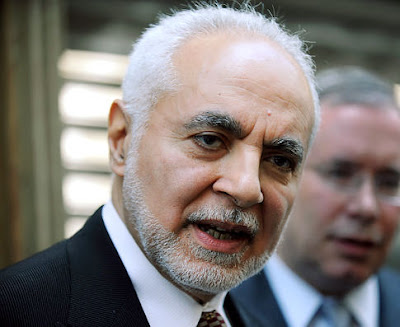 There is no difference between the aims of Israel’s arch enemies and this imam, only that he desires to see the end result, peacefully, or so he says. This is the same imam that Obama has sent abroad as some kind of representative of US interests, but in all actuality, he’s busy pimping his mosque building project at Ground Zero, which goes against US law.  KGS


Feisel Abdul Rauf on Israel and Iran.
In his own words, Imam Rauf:

“In a true peace, Israel will, in our lifetimes, become one more Arab country, with a Jewish minority”…
“Learn from the example of the Prophet Mohammed, your greatest historical personality. After a state of war with the Meccan unbelievers that lasted for many years, he acceded, in the Treaty of Hudaybiyah, to demands that his closest companions considered utterly humiliating. Yet peace turned out to be a most effective weapon against the unbelievers.”
Read it all here.