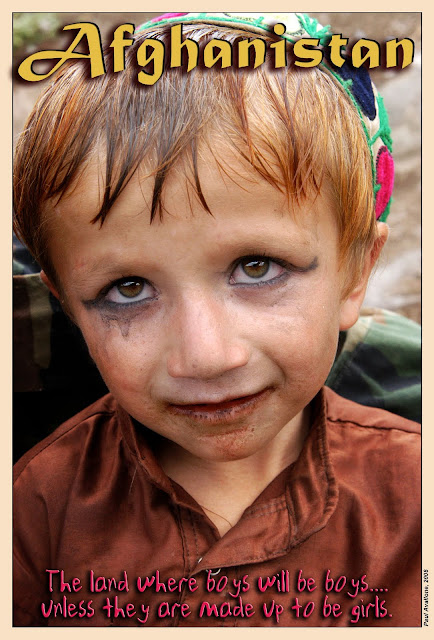 Please kill the bastards that rape me
This is the other side of Afghanistan that most in the MSM  refuse to address, because it invokes, outrage against and disgust for, the Ideology of Perpetual Outrage (IPO). These boys that become men who rape boys who become men who rape other boys, is such an outrage that it almost leaves one speechless.
Face it, Islam encourages this type of behavior as a result of its backward, anti-social rules stemming from the Koran and the hadiths. KGS
[So, why are American and NATO forces fighting and dying to defend tens of thousands of proud pedophiles, certainly more per capita than any other place on Earth? And how did Afghanistan become the pedophilia capital of Asia?]
Koran 52:24:
Round about them will serve, to them, boys (handsome) as pearls well-guarded.
Koran 56:17
Round about them will serve boys of perpetual freshness.
Koran 76:19
And round about them will serve boys of perpetual freshness: if thou seest them, thou wouldst think them scattered pearls.

Islamic poet, Abu Nuwas:
O the joy of sodomy!
So now be sodomites, you Arabs.
Turn not away from it–
therein is wondrous pleasure.
Take some coy lad with kiss-curls
twisting on his temple
and ride as he stands like some gazelle
standing to her mate.
A lad whom all can see girt with sword
and belt not like your whore who has
to go veiled.
Make for smooth-faced boys and do your
very best to mount them, for women are
the mounts of the devils
Diana West writes : Joel Brinkley, writing in the San Francisco Chronicle, lifts a rock and finds Afghan culture — predatory and abusive, twisted out of human shape by a fusion of Pashtun and Koranic influences.
Western forces fighting in southern Afghanistan had a problem. Too often, soldiers on patrol passed an older man walking hand-in-hand with a pretty young boy. Their behavior suggested he was not the boy’s father. Then, British soldiers found that young Afghan men were actually trying to “touch and fondle them,” military investigator AnnaMaria Cardinalli told me. “The soldiers didn’t understand.”
All of this was so disconcerting that the Defense Department hired Cardinalli, a social scientist, to examine this mystery. Her report, “Pashtun Sexuality,” startled not even one Afghan. But Western forces were shocked – and repulsed.
This would appear to be the same report that Fox News obtained in January of this year, and wrote up here. It didn’t go anywhere then — mainstream-speaking. Will it get the urgent discussion it requires now (as in, what are we doing there, propping up a pederast culture)? Back to Brinkley:
For centuries, Afghan men have taken boys, roughly 9 to 15 years old, as lovers. Some research suggests that half the Pashtun tribal members in Kandahar and other southern towns are bacha baz, the term for an older man with a boy lover. Literally it means “boy player.” The men like to boast about it.
“Having a boy has become a custom for us,” Enayatullah, a 42-year-old in Baghlan province, told a Reuters reporter. “Whoever wants to show off should have a boy.”
Baghlan province is in the northeast, but Afghans say pedophilia is most prevalent among Pashtun men in the south. The Pashtun are Afghanistan’s most important tribe. For centuries, the nation’s leaders have been Pashtun.
President Hamid Karzai is Pashtun, from a village near Kandahar, and he has six brothers. So the natural question arises: Has anyone in the Karzai family been bacha baz?
More here.