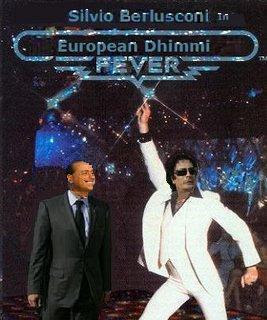 Muamar Gaddafi: Play that
funky call to prayer Muezzin man
Why they allow this jerk to soil the soil of Italy is beyond the Tundra Tabloids, Gaddafi though, is the best poster child for the counterjihad that could ever be imagined, he’s Anjem Choudary time a hundred. KGS

ROME – Libyan leader Moamer Gadhafi’s visit to Rome to mark the second anniversary of a friendship treaty with former colonizer Italy stumbled into controversy Monday after he said Europe should convert to Islam.

Gadhafi made the comments on Sunday during a lecture to 500 young women hired and paid by an agency to attend his lecture.
“Islam should become the religion of all of Europe,” one of the women quoted Gadhafi as saying in the Italian press.
The agency paid the women, mainly students who hire themselves out for advertising of publicity events, 70 or 80 euros (90 or 100 dollars) to attend and said it would not pay girls who gave their names to the press.
It also told them to dress conservatively for the lecture.
About 200 women on Monday gathered at the Libyan cultural centre in Rome to attend a second lecture.