Chairman of the Finnish branch of AI Fran Johansson: Oh crap, with the Tundra Tabloids, Vasarahammer, NGO-Monitor and the JPost watching, I can try to hide my anti-Semitism in Finnish, but not successfully!
UPDATE: He’s now saying that it was a mistranslation, though he had the chance during the Weinthal interview to distance himself from the translation of the word he used, “scum state”, he’s now saying after the fact that it was a bad translation, with the design to blow things out of proportion. But (a) he refused to challenge the journalist who used the term more than once and (b) spoke of using similar highly charged wording when directing it against GWBush while (c) then claiming later on that he hadn’t meant to offend anyone by the term.
J’lem Post journalist, Benny Weinthal, contacted the Tundra Tabloids to enquire further about the anti-Semitic incident involving the chairman of the Finnish branch of Amnesty International, Frank Johansson, after coming across the initial story published at the Tundra Tabloids (H/T: Finnish blogger Vasarahammer) detailing Johansson’s labeling Israel as a “scum state”. 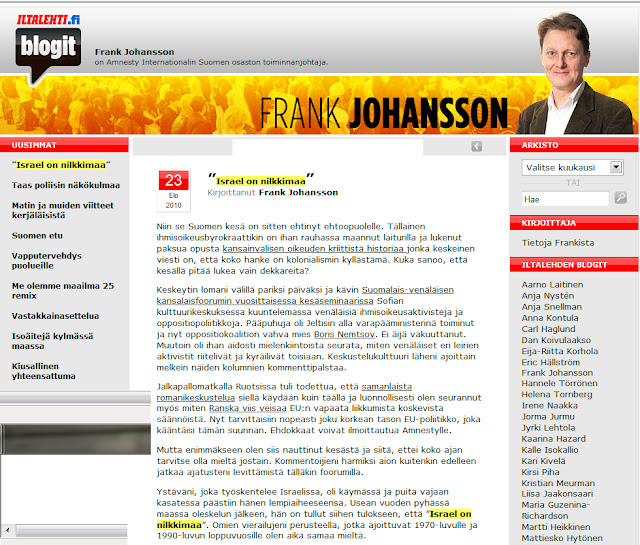 The article by Weinthal appears in today’s edition of the J’Lem Post, and surprise, the offending blog post by the AI chairman at the Iltalehti website has been scrubbed, thrown down the memory hole, but thanks to Vasarahammer we have the cached picture of the post.

Even if the removal of the post is an admission of guilt, it’s not good enough, there needs to be a full apology coming from AI chairman Frank Johansson. KGS 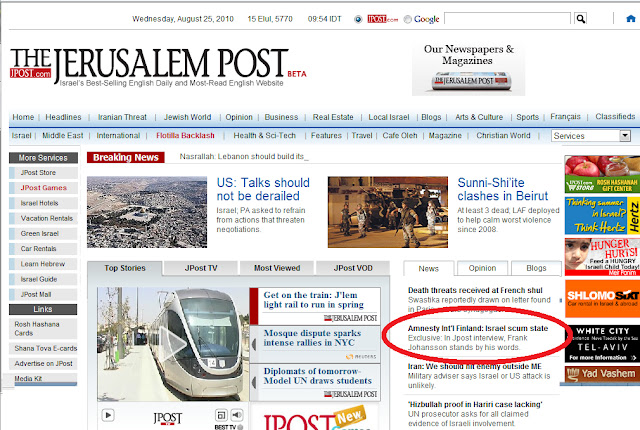 JPOST: Asked why he termed Israel a “scum state,” Johansson told the Post in a telephone interview that it was because Israel has “repeatedly flouted international law,” and due to his “personal experiences inside and outside of Israel with meeting Israelis.”
Johansson said that his remarks were not anti-Semitic. “I actually praise Breaking the Silence,” he said, referring to an Israeli organization claiming to collect and share testimonies of former IDF soldiers over human rights violations they allegedly witnessed, while rarely providing names of troops, dates and locations of these incidents.
Asked whether there are other countries aside from Israel that, according to him, meet the definition of a “scum state,” Johansson did not specify any, but noted that there are “Russian officials” who meet the criteria.
The Amnesty International official said: “I have been on record on Finnish TV as saying George Bush is the biggest executioner in the Western Hemisphere, [I] use strong language… I am writing those [blogs] in my capacity as a private person, not as an Amnesty official.”

However, Iltalehti’s Web site clearly provides readers with his title as “director of the Finnish branch of Amnesty International,” which appears above his blog.

NGO Monitor chief Gerald Steinberg condemned Johansson’s remarks in the context of his organization as a whole. The head of the watchdog organization, which tracks anti-Israel activity among NGOs, told the Post in an e-mail on Tuesday that “Amnesty International has promoted an intense anti-Israel ideology, resulting in statements like these. Such one-sided ideological campaigns, with false allegations of war crimes, are entirely inconsistent with Amnesty’s claim to support ethical principles and universal human rights.
“Amnesty International’s new secretary general, Salil Shetty, must immediately condemn this immoral statement by the head of the Finnish chapter, freeze links to the chapter until he resigns, and take measures to end Amnesty’s central role in demonizing Israel,” he added.
Also Tuesday, a spokeswoman for Amnesty International’s headquarters in London, Susanne Flood, told the Post in a telephone interview that “Amnesty would never use an expression like this toward the State of Israel, or any other state.”
Read it all here. 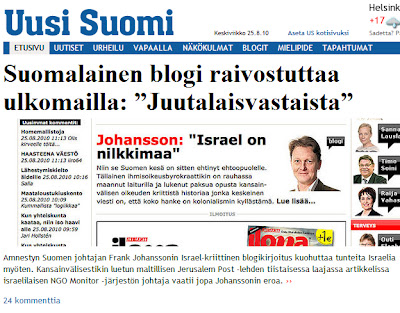