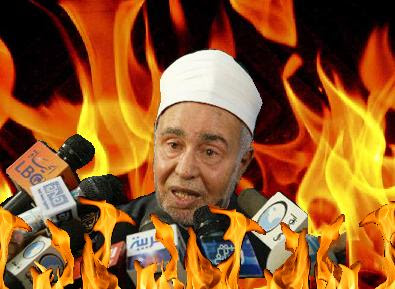 Sheik Tantawi from hell: I would like to commend
the brothers in Holland for continuing my life’s work
Isi Leibler writes in the Jerusalem Post about a subject that the Tundra Tabloids has been dealing with for years, that being, the rise of anti-Semitism in Europe due to the expansion of Islamic communities thanks to the mass immigration policies of the political elite rooted in multiculturalism. These policies left unchecked and/or altered, stand to complete what Adolf Hitler’s murderous National Socialist regime failed to do entirely during WWII, that is, the removal of all Jewish life in Europe.
These are heavy words, but they must be said nonetheless, and something that the author, Isi Leibler, understands. His article ends with a ray of hope around one of the most badly maligned and smeared politicians in Europe today, Geert Wilders. Isis Leiber, as well as the Tundra Tabloids, sees in Wilders the last flicker of hope, liberty and freedom, for not only Jews, but for all Europeans as well. Read the article in full here.

Like many Jews, as a youngster I associated Holland with windmills and tulips and a heroic people which bravely defended Jews during the Nazi occupation.
Alas, I subsequently learned that the record of the Dutch towards the Jews was nothing of the sort. There were tens of thousands of Dutch righteous gentiles who risked their lives to save Jews but there were far more collaborators, over 25,000 of whom even volunteered for the Waffen SS. Overall, the Dutch authorities willingly assisted in the deportation of the Jews. Anne Frank and her family were amongst those denounced to the Nazis. Of the 140,000 Jews living in the Netherlands before the war, over 100,000 were murdered.
Today, there is a popular misconception that the Dutch are an easygoing, tolerant, multi-cultured people.
In truth, Dutch society has become polarized as a consequence of the massive influx of non-Western immigrants, predominantly Muslim, who have shattered social stability. Muslims currently comprise one million out of a 16 million population, a disproportionate number of whom have police records.
Together with indigenous anti- Semites, some radical Muslims have effectively exploited the culture of permissiveness to violently promote their objectives.
[…]
HOWEVER, THERE is now a potential for positive change on the political horizon. At the recent polls, contrary to expectations, the Dutch Freedom Party (PVV) headed by Geert Wilders surged from its pre election nine seats to winning 24 out of the 150 seat Dutch parliament.
Nicknamed Mozart because of his blond hair and voted politician of the year in 2007, Wilders displays contempt for the hypocritical political correctness displayed toward Islam that has enveloped Europe. He resolutely calls for tough action against intimidation and threats from Islamic fundamentalists.
He describes Muslim migrants as a “Trojan Horse” and warns of the danger of Europe being transformed into Eurabia and European civilization coming to an end.
Wilders is an outspoken friend of the Jewish people and considers Israel to be “the West’s first line of defense”. He lived in Israel for two years and has visited the Jewish state more than 40 times.