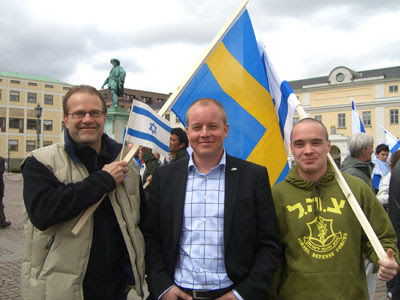 Sweden Democrats find strong support in spite
of all the smears against them in the major media
In Sweden, there is no free press, just armed wings (with a pen) of the Social Democrat Party that bludgeon to death anyone willing to buck their world views. The SD party has bucked their notion of “Swedish society” as is, and are reapng the benefits as the public catches on that they are not the “waycists” the SDP and far-Left have painted them to be. This is going to get interesting when they get not only seats in parliament, but to be power brokers as well. KGS

Share With 35 days to go before Sweden votes in a general election the Alliance coalition retained its slim lead over the Red-Green opposition, a new poll from Sifo shows. The far-right Sweden Democrats would meanwhile claim seats in parliament.
Sifo’s August poll, published in several morning newspaper on Monday, shows that the Alliance hold a lead of 3.6 percentage points in comparison with 3.3 points in its previous poll last weekend. The slight change is however not categorized as statistically significant.
“The only thing one can be certain of is that it is very close between the blocs,” Toivo Sjörén, head of Sifo’s surveys, to the Svenska Dagbladet daily.
The Social Democrats crept up slightly to 31.3 percent, up from 30.6 percent and reclaiming their spot as the largest party, ahead of the Moderates on 30.5 percent.
14.1 percent of those surveyed responded that they either planned to submit a blank vote or have not yet decided how to vote, equating to 800,000 votes.
“This is an incredibly close election and we will fight to the last to gain renewed confidence,” said prime minister Fredrik Reinfeldt to news agency TT.
If an election were to be held today the far-right Sweden Democrats would not only claim seats in parliament, they would hold the balance of power between the blocs, the survey shows.
“We don’t know what is around the corner in the next mandate period. To secure a stable government is to secure the public finances and stability in the welfare system,” Reinfeldt said.