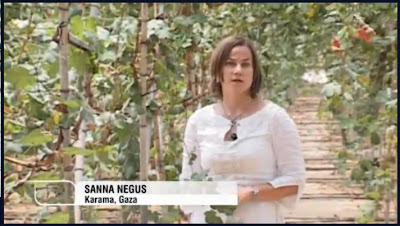 Sanna Negus: To understand Gaza
just remember it’s all the Jooos fault
YLE sucks, that’s all you have to remember when thinking about the Finnish state broadcaster’s reporting on anything related to Israel. She’s an unabashed state of Israel basher, pumping out one story after the other that inevitably casts Israel in a negative light.
The latest report by Negus blames the Jews for the lack of agriculture export due to the weapons blockade of Gaza, but fails to tell her audience that it was the Gazans themselves who ripped up the green houses bought and purchased for them by Jews in America.
The produce that they farm is not allowed for export due to Israel’s blockade….Egypt is for some reason not mentioned at all, though they share the whole southern border with the Hamas run enclave. Nor does she tell why the exports were limited…due to rocket attacks on Israeli civilian centers. If you understand Finnish, here is the report that starts around the 4 minute mark, and is good for thirty days. The woman is shameless. KGS
H/T Vasarahammer