They are calling him an Israeli, but not mentioning the fact that he’s an Arab, which means, yes, a Palestinian. 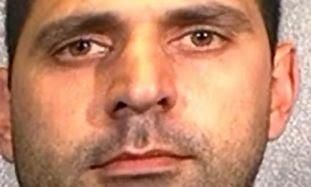 Elias Abuelazam, 33, an alleged Israeli citizen suspected of stabbing five men to death and wounding a dozen others in Michigan, Virginia, and Ohio was arrested as he tried to board a plane for Tel Aviv, police said Thursday.
US Customs and Border Protection arrested the man at 10:00 p.m. on Wednesday night at the Atlanta airport, as he attempted to board a Delta flight to Israel. Israeli media reported that the suspect is an Israeli citizen.
In a news release, police in Leesburg said the suspect was being held on unrelated charges. Leesburg Police Officer Chris Jones said authorities believe the man could be the suspect and has ties to Leesburg and Flint, Michigan.