Because it leads to idiotic polls winning approval by a sheepish citizenry instead of being laughed at and derided outright. 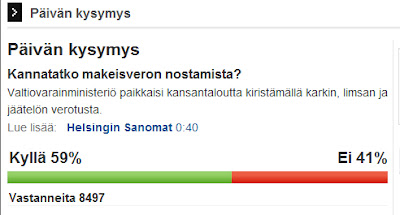 The poll question reads as follows: “Do you favor the raising of tax on sweets? The Treasury would like to raise taxes on sweets, sodas and icecream to help the economy”.
59% voted in approval of the measure.
Now, one of the reasons why they can get away with this is that they (Finnish citizens) look to the role government plays in “keeping us all healthy”. There’s a whole list of things wrong with that notion, but lets move on to the other question, how can you really seek to help the economy by increasing the tax on products that people would want to buy during good times? Self defeating statist nonsense.
Listen up US readers of the TT, if you don’t want to see your government in the role of being your physician, I highly recommend that you reject Obama care come November. KGS
NOTE: Think about it, here Finns have long held the idea that the state knows better, and it shows by how passive and slavish they are in actually voting for the raising of their already outlandish taxes. Say no to VAT (value added tax).