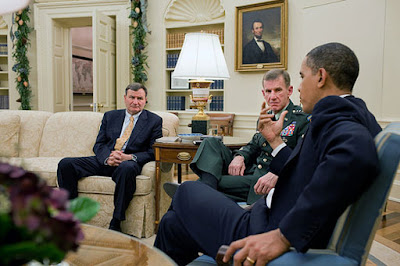 Obama: You see general, I have all this experience
as a community organizer and I think…….
No one would have heard such a thing during the Bush administration, he allowed his generals a free hand to contract the war and make adjustments where needed. Obama rarely if ever conferred with his military leaders about anything, but kept a big hand on what policy they were to carry out.
The man is out of his league on so many different levels its staggering. I find amusing that general McChrystal turned to Rolling Stone magazine to spill the beans about the grossly inept Obama and his handling of the war effort in Afghanistan, it mirrors his strategy in the Gulf of Mexico with the oil spill.

Face it, the overwhelming majority of the armed forces do not have any trust in the Marxist manchurian candidate, nd if asked, many would back general McChrystal’s view about Obama and his policies. KGS

McChrystal out, Petraeus in

President Barack Obama sacked his loose-lipped Afghanistan commander Wednesday, a seismic shift for the military order in wartime, and chose the familiar, admired — and tightly disciplined — Gen. David Petraeus to replace him. Petraeus, architect of the Iraq war turnaround, was once again to take hands-on leadership of a troubled war effort.

Obama said bluntly that Gen. Stanley McChrystal’s scornful remarks about administration officials in interviews for a magazine article represent conduct that “undermines the civilian control of the military that is at the core of our democratic system.”

He fired the commander after summoning him from

Afghanistan for a face to face meeting in the Oval Office and named Petraeus, the Central Command chief who was McChrystal’s direct boss, to step in.