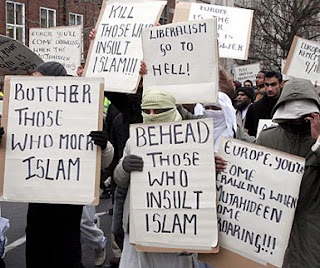 There is no such thing as Islamophobia, it’s an ideology, not a race. To buy into the “Islamophobia” meme is also to buy into for example, “Marxist-Socialistophobia, National-Socialistophobia”, nonsense as well.
Islamophobia my eye, what a ruse, what a bunch of malarky, how can any sane rational person buy into this nonsense? The OIC kingpin, Ekemleddin Ihsanoglu, should be grabbed by the scruff of his neck and given a big shoe print planted to the seat of his pants, with a “get lost you moron!” added as he flew out the door.
Honestly, I just don’t know why these fools are even given the time of day by anyone in the West. I confronted this moron (Ihsanoglu) while he was in Helsinki in 2008, sitting up there with the nit-wit tag team of Marko Juntunen and Raimo Väyrynen. He had the nerve to issue a bigoted statement “that only a non-Muslim could be an anti-Semite” while crying on about Islamophobia.
Juntunen and Väyrynen just sat there like a couple of houses by the side of the road.
To hell with these morons. They wouldn’t know the truth even if it was written on the front of a bus that was driving over them, because they’re idiots. KGS

UNITED NATIONS — Muslim governments on Wednesday pressed the United Nations to step up investigations of Western countries to root out what they call “Islamophobia” — defined by them as discrimination against people of the Muslim faith.
Delegates from Islamic countries, such as Egypt, Iran and Pakistan, drafted new guidelines for the UN’s freedom-of-religion investigator that say Western diplomats aim to shield Islam from commentary Muslims might deem derogatory.
During a debate in front of the UN Human Rights Council, they also charged that the UN’s anti-racism investigator — in a report he tabled about his activities — had not focused enough on what they called the rising incidence of discrimination against Muslims in Western countries.
According to the 57-member Organization of the Islamic Conference (OIC), the anti-racism investigator should focus on what it called “contemporary” racism, “particularly in Western societies.”
The group said Islamophobia was growing “particularly in the countries of the North.”
Egypt and Libya also charged that Muslims were targets of racism and discrimination in Western countries.
“People of foreign descent, such as Africans, Arabs, Muslims and Asians, do face derogatory stereotyping and stigmatization in an environment of victimization and xenophobia and, at times, violence,” said Ahmed Ihab Gamaleldin, the Egyptian delegate.
From Ottawa, Canada called for a “constructive approach” to ensuring the right of freedom of religion.
But the OIC is likely to see their new guidelines for the freedom-of-religion investigator approved, since Muslim countries and allies — such as Cuba, Russia and China — form a voting bloc in the Geneva-based body that overshadows that of the Western democracies.