The list of attacks against Jews in the Netherlands keeps on growing. Here is the latest sad news: a synagogue was vandalized with the smearing of red paint, most likely tied to the “outrage of the Muslim street” over the “Flotilla of the Huns” incident.
Turkish jihadis commandeered a ship with the blessings of the Turkish government, to spring a trap on IDF soldiers who were expected to drop in to steer the ship to the coastal Israeli port of Ashdod for inspection.
So the Jews of the Netherlands are made to feel the rage of the Muslim street, but lets face facts, they don’t need any reason for sudden rage syndrome, just walking past a Muslim while being Jewish is more than enough to set them off. KGS 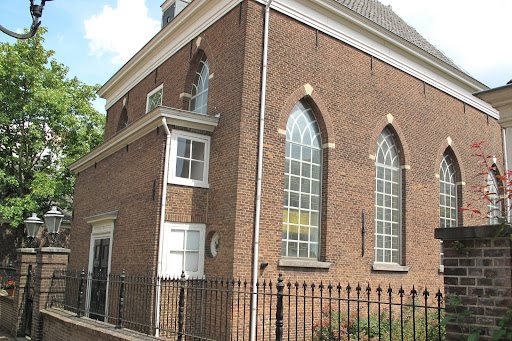 Amersfoort synagogue smeared with paint
AMERSFOORT (Reuters) – The Synagogue of the Jewish Community Amersfoort is smeared with red paint. The police surveillance in the coming days additional property, a police spokesperson reported Wednesday.
At the synagogue are big blobs of red paint left, but no offensive slogans or written texts. The Jewish community has reported the destruction. It is still unclear, according to the police or to vandalism or that there is a purposeful action.  “We’re being in surveillance at least extra in this location,” said the spokesman.

H/T Bad News From the Netherlands:

The synagogue in Amersfoort has been daubed with large quantities of red paint. No text or graffiti were added. The Jewish community has put in a complaint with the police. According to the police it is unclear whether this is vandalism or a targeted action.