EDL: All we are saying, is give England a chance
Thanks to The Sheik for the following story about not only the EDL’s peaceful march, but also about the Leftist rag Daily Mail which chooses to badly malign these British patriots while sucking up to the more unsavory elements in British society. 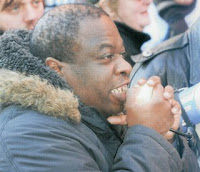 As the Sheik correctly points out, Weymen Bennet, is a white hating trouble making ruffian, who stirs up the crowds to incite violence. This was one of the idiots arrested in Bolton after they took to violence, with the vain hope in causing a big uproar amongst the peaceful EDL.
Thankfully there is the Internet, where the average person can fact check the Leftist lame stream media’s news reporting with what the blogosphere is reporting on the same incident(s) and allow the people to decide who’s telling the truth.
Very interesting how the Daily Mail takes to bad mouthing the EDL:

Daily Mail: St George’s Cross: Fascist protesters young and old were draped in English flags and wearing clothing emblazoned with the national symbol (The Sheik: Nationalism and resisting Islamofascism is a bad thing for leftist progressives/ed)
The Daily Mail then, by default, supports Islamofacism, the fomenting of racial hatred towards ethnic British white people and their non-white supporters, while seeking to promote a false divide between the races.
Lets face facts. It’s is both sides of the Left, the Marxists and National/Fascist Socialists, who are tearing apart the societal fabric of our societies by using race and ethnicity in their politics. These two groups, which the EDL and the Counterjihad at large absolutely loathe, are alone responsible for the continuous race baiting that happens generally in society and for being friendly with Islam, with lion share of the blame going to the socially acceptable Marxists, since they control the levers of power and the others are relegated to the extreme fringe.
Both the Marxists and National/Fascist socialists use race to validate their existence, and both need to be exposed for what they are, they simply can’t survive without each other and are a major drain on our societies. The Tundra Tabloids would like nothing better than to see both versions of the Left, the “soft Socialist Marxists” relegated to the extreme periphery like their ideological cousins, the Fascist and National Socialists already are, then eventually stamped out altogether. KGS

NOTE: Read it all here at the Sheik’s place, he does an upstanding job splicing it all together.