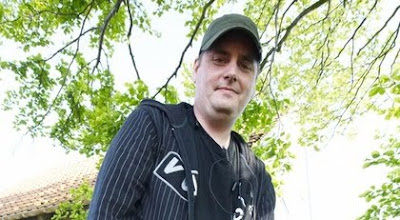 Roger Sahlström: It’s the least I could do,
the man is sacrificing life and home for free speech

This guy embodies the best of the Counterjihad and Western society, what he’s doing is saying not only to Mr.Vilks, you’re not alone, he’s saying to the rest of society is “start shouldering your responsibilty and safeguard your liberties”. To the Muslims he’s saying you’re not going to intimidate us, remember that there are more of us than of you. KGS

NOTE: The Tundra Tabloids is really proud of this man, really proud. Visit his blog and give him some support, both morally and financially.

Related: From Reinhard: The Muslims who tried to set Vilks’ house on fire were friends with Anas Khalifa, whose anti-Semitic preaching was publicized by MEMRI. Swedish MSM reported on this but then removed the article. PI has it here. (warning, sloppy google trans)

He protects the Vilks house

NYHAMNSLÄGE. Roger Sahlström, 37, IS camping in the garden of artist Lars Vilks. – I am watching his house around the clock, “he says. Next to the lawn is the dog Bama and a crowbar to stop intruders.

– I hesitate not to intervene if someone unlawfully enters the property.

Roger Sahlström thought enough was enough after the attack, who, during the lecture in Uppsala and the ensuing fire attack on house in Nyhamnsläge.

– I called Lars Vilks and offered to guard the house and he was really touched and said we were welcome.

Roger Sahlström say they should be seen as vigilantes who pulls out when democracy is not able to protect the important values in society.

– You can think what you will about Lars Vilks different actions, but freedom of speech gives him the right to really say exactly what he wants and the Muslims must understand.

Roger Sahlström believe that many people today, according to a laxity of democracy.

– It scares me that our politicians are dead silent. It is they who will defend and strengthen democracy.

Lars Vilks for himself went abroad yesterday, but left the basement door open for Roger Sahlström, it would be bad weather and rain into the tent.

– I have no idea how long I stay. But I have urged people who read my blog to help with the navigational watch.

From the police have no comment on the tent in the garden Vilks.

– It must be borne by the person making it. But no person may take the violence beyond the legitimate defense of the right to give permission, “says Marie Keismar, spokesman in southern Sweden.