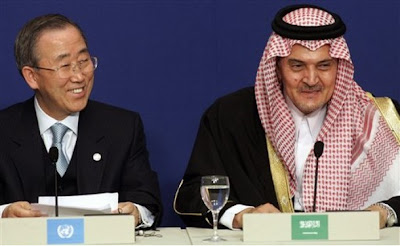 Ban Ki-Moon: You see, I told you that
we’d keep the Jews in our sights…
Lets see here, the UN has devolved into being nothing more than a forum to demonize the Jewish state, in which every two-bit Jew hating thug leader can sling every kind of insane charge against her and be applauded for it. So now they’ll be zeroing in on Israel’s nuclear weapons capability, in spite of the fact that the mere suggestion that they may exist has kept thug Arab states from trying to invade it and kill every living man, woman and child.
So as the Tundra Tabloids views it, the UN is going to try and disvest from Israel the very (potential) weapon that has kept the region stable over the last 30 some years, thereby setting the stage for large conventional wars. But lets not stop there. Instead of going after Iran, which has been more than open about its grand plans for the Jewish state, they’ll turn their attention towards Israel like a drunk looking for his lost keys by the lamp post.
The UN is a disgrace, and its current leader a moron. KGS

IAEA set to focus on Israel

VIENNA — Israel’s secretive nuclear activities may undergo unprecedented scrutiny next month, with a key meeting of the International Atomic Energy Agency tentatively set to focus on the topic for the first time, according to documents shared with The Associated Press.
A copy of the restricted provisional agenda of the IAEA’s June 7 board meeting lists “Israeli nuclear capabilities” as the eighth item — the first time that that the agency’s decision-making body is being asked to deal with the issue in its 52 years of existence.
The agenda can still undergo changes in the month before the start of the meeting and a senior diplomat from a board member nation said Friday the item, included on Arab request, could be struck if the U.S. and other Israeli allies mount strong opposition. He asked for anonymity for discussing a confidential matter.
Even if dropped from the final agenda, however, its inclusion in the May 7 draft made available to The AP is significant, reflecting the success of Islamic nations in giving concerns about Israel’s unacknowledged nuclear arsenal increased prominence.
The 35-nation IAEA board is the agency’s decision making body and can refer proliferation concerns to the U.N. Security Council — as it did with Iran in 2006 after Tehran resumed uranium enrichment, a potential pathway to nuclear weapons.
A decision to keep the item would be a slap in the face not only for Israel but also for Washington and its Western allies, which support the Jewish state and view Iran as the greatest nuclear threat to the Middle East.