Skip to content
Home
/
2010
/
May
/
7
/
Goldstone Report
/
AUTHOR OF ANTI-ISRAEL ‘GOLDSTONE REPORT’ WAS A S.AFRICAN APARTHEID JUDGE WHO CONDEMNED 28 BLACKS TO DEATH…….
Facebook
Twitter
Google+
LinkedIn
Pinterest
Of course the UN would choose such a stellar individual to author a report that indicts Israel on the international stage, the man they chose, Richard Goldstone, sat as a judge for the white run apartheid government of South Africa and dispenced its “justice to the people”.
The Tundra Tabloids has often quoted Alan Dershowitz’s reasoning that “Israel can expect the same kind of “justice” from the international commnity, that a black African American could expect in the segregated South.” But little did the TT believe that Dershowitz’s quote would be validated in such an overwhelming way. KGS 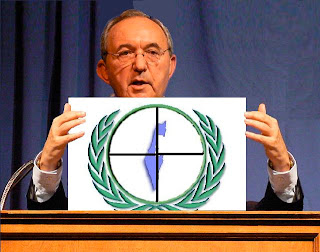 Judge Richard Goldstone: I was obligated to honor the
laws of the country, even under Apartheid rule
Alan Dershowitz: (Comparing Goldston’e defense to that of Nazi war criminals.) “You know, a lot of people say we just followed the law, German judges… That’s what (German SS officer and physician Josef) Mengele said too”
H/T: Stefan

Yedioth Ahronoth investigation reveals man preaching human rights, who authored scathing report against Israel’s operation in Gaza, sent at least 28 black defendants to gallows as South African judge under Apartheid regime.
He asserted that Israel committed war crimes and came out against the Israel Defense Forces, whom he claimed violated basic human rights. Judge Richard Goldstone forgot just one thing – to look long and hard in the mirror and to do some soul-searching before he rushes to criticize others.
A special Yedioth Ahronoth investigation reveals Richard Goldstone’s dark side as a judge during the Apartheid era in South Africa. It turns out, the man who authored the Goldstone Report criticizing the IDF’s actions during Operation Cast Lead took an active part in the racist policies of one of the cruelest regimes of the 20th century.
During his tenure as sitting as judge in the appellant court during the 1980s and 1990s sentenced dozens of blacks mercilessly to their death.
This stain on Goldstone’s past kept him from coming out against the death penalty on many occasions and from vehemently criticizing countries who still allow executions. Goldstone didn’t bother confessing and telling about his actions in any of his statements or speeches.
Yedioth Ahronoth’s findings show that Goldstone sentenced at least 28 black defendants to death. Most of them were found guilty of murder and sought to appeal the verdict. In those days, he actually made sure he showed his support for the execution policy, writing in one verdict that it reflects society’s demands that a price be paid for crimes it rightfully views as frightening.
In another verdict, in which he upheld the execution of a young black man convicted of murdering a white restaurant owner after he fired him, Goldstone wrote that the death penalty is the only punishment likely to deter such acts.
‘Merely upholding laws of country’
It should be noted that whites, granted superior status under Apartheid Law, were the ones calling that such a heavy price be exacted for violent crimes, while the black majority in South Africa consistently opposed the death penalty.
Only in 1995 when Nelson Mandela took power was the South African constitution amended and the death penalty abolished. Hundreds of people sitting on death row were spared, including some that Goldstone himself sent there.
Even when it came to far less serious offenses, Goldstone sided through and through with the racist policies of the Apartheid regime. Among other things, he approved the whipping of four blacks found guilty of violence, while he acquitted four police officers who had broken into a white woman’s house on suspicions that she was conducting sexual relations with a black man – something considered then in South Africa as a serious crime.
In another incident, Goldstone sentenced two young black men merely for being in possession of a video tape showing a speech given by one of the senior officials in Nelson Mandela’s party.