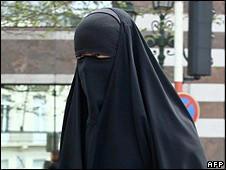 The burka wearing bandit should never have been allowed inside the bank in the first place, Vlad Tepes is right, perhaps we shouldn’t be busy banning burkas but enforcing laws that demand full facial recognition, like riding in public transportation, going into banks etc.. KGS

A gunman dressed in a head-to-toe black burqa and sunglasses robbed a cash courier in a shopping centre car park.The courier had just withdrawn a large amount of money from a bank yesterday when he spotted two men following him, Australian police said.

He returned to his vehicle which was parked in the car park when one of the men approached him and told him his tyre was going flat.

The man became suspicious and drove from the scene, changing his tyre in a nearby street before driving to a shopping centre.

Whilst he was parking his vehicle in the car park, he was approached by a man wearing a full burka and dark glasses.

The man pointed a pistol at him and demanded he hand over the money.
The victim handed over a bag containing a large amount of cash, and the man then ran off.

The 35-year-old victim works as a cash courier for jewellery businesses and was working on a job in Sydney at around 3pm when he was robbed, New South Wales state police said.
The burka is the most concealing of all Islamic veils. It covers the entire face and body, leaving just a mesh screen to see through.

Here’s a video of past bankrobbers in burkas.