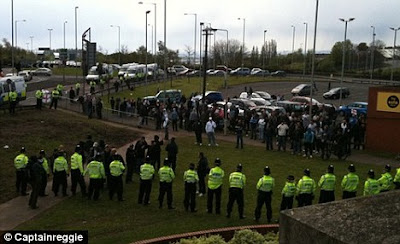 According to the Daily Mail’s report below, the Dudley Muslim Association announced that it was scrapping the plans for the mosque before the demostration began, but according to the Tundra Tabloids’ colleague, Gaia;
“they have NOT been scrapped! That is a ruse to get them off the roof, they only came out with this ridiculous announcement today, after the protest had started.”
The media is in on the fix, at least the Daily Mail, which can be seen by the way they’re depicting the valiant lads of the EDL, in much the same way the Tea Party in the US is being maligned by the heavy left leaning main stream media. According to a TT source, this just in: “The protest is over, armed police just stormed the roof and arrested em.” KGS Around 30 masked protesters were ordered off the site as fights broke out. Several EDL members clambered onto the roof of the building earmarked for super mosque development. A police officer and local teenager were taken to hospital for minor injuries after the clashes.
It comes just a month after 2,000 of far-right EDL protesters descended on Dudley to march against Islamic extremism. Some bashed down metal fences, threw metal brackets at police and even fought with their own stewards who were trying to calm them down.
This morning, four men dressed in balaclavas and army fatiques remained on the roof of the old clothing factory where they unfurled banners reading ‘No to the burka’ and ‘no mosque’.  Riot police are in a stand-off with ring-wing protesters who stormed the site of a planned ‘super mosque’.
Four members of the far-right English Defence League scaled the roof of a derelict building in Dudley, West Midlands, yesterday waving anti-Muslim banners. Dozens of protesters gathered at the site on Sunday night after an internet campaign calling upon EDL supporters to attend a protest.
[…]
Officers have cordoned off the area and are currently negotiating with the protesters. The protest came as the Dudley Muslim Association announced they were scrapping plans for the £18million mosque which have caused such controversy in the town.
The mosque, which would have been built on derelict land, would have had a 65ft minaret, and the proposals have been dogged by controversy from the beginning, Two petitions of more than 50,000 signatures were gathered in opposition. Residents who objected said the mosque would dominate the skyline and be out of keeping with the town’s medieval character.
They also objected to the mosque being built on land designated for employment use. Dudley Council threw out the application in 2007, but it was granted at an appeal the following year by a government inspector.