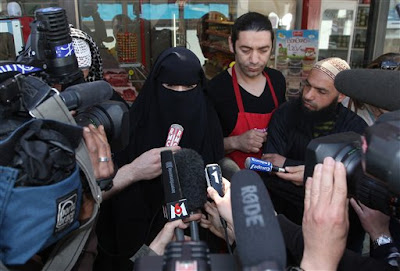 Busted Burka Babe: I’m just one of the four,
why y’all picking on me cus I got caught?
Throw the guy out! The Algerian polygamist has been acting as a social welfare pimp for years, scaming the French social system and the people with his four wives to pay for his 12 kids. At least in real prostitution the customer willingly pays and gets something in return, in this situation the French people are forced into being customers and then systematically raped.
Pamela has the goods here, who received an email from a French citizen who found out more about the recent bust of a burka’ed woman driving a car. Turns our she’s just one of four wives that have been living off the hard work of the good people of France. Also noteworthy is the related subject of Al-Hijra: The Islamic Doctrine of Immigration.

Al-Hijra: The Islamic Doctrine of Immigration – Accepting Freedom or imposing Islam? By Sam Solomon & E Al Maqdisi
The Hijra: Little do they realize that this strategic pattern of demands is part of an insidious, 1,400-year-old proscription for Muslims that originates in the Koran and the Sunnah, the deeds of Mohammed. It is the Hijra or doctrine of immigration. Modeled by Mohammed’s migration from Mecca to Medina, this immigration is not to a romanticized melting pot wherein newcomers gratefully search for opportunities for a better life in liberty and freely offer their talents and loyalty to benefit their new homeland. This is immigration for Islamic expansionism employing ethnic separatism to gain special status and privileges within the host country. Hijra is immigration designed to subvert and subdue non-Muslim societies and pave the way for eventual, total Islamization.
In their compelling book, “Modern Day Trojan Horse: The Islamic Doctrine of Immigration,” authors Sam Solomon, a former professor of shari’ah law and convert to Christianity, and Elias Al Maqdisi, an expert on Islamic teachings, explain the migration of Muslims to the Dar-al-Harb, the “land of war,” as a religious edict with a basis in Islamic doctrine. They delineate the step-by-step process of this 1,400-year-old strategy of conquest. It is a transitional strategy which they characterize as the most important step in spreading Islam and preparing for jihad. From their carefully delineated treatise on Hijra, it is clear that migration in concert with military conquest comprise the bookends of Islamic expansionism.
Solomon and Al Maqdisi review the phases of the Hijra and its juristic or legal basis in Islamic doctrine. Under the cover of taquiya or deception, the step-by-step methodology of the migration process is designed to subdue, then, subjugate the host culture, culminating in implementation of shari’ah law.
The beginning phase of Islamization usually includes activities pivotal to building a physical presence. It consists of public calls to prayer; founding of schools, libraries and research centers; and the teaching of Arabic — actions that appear to be reasonable and respectable infrastructure requirements necessary to support the presence of a faith. At this point in the Hijra, it is permissible for Muslims to engage in haram, or forbidden actions, out of necessity to establish and empower the umma or Muslim community. Koranic rules such as the prohibition against friendships with infidels are suspended while the objectives of future Islamization are systematically put into place. In its initial phase, the Hijra passes scrutiny by the West whose citizens erroneously view the migration as mainly economic — a pilgrimage for a better life.
Solomon and Maqdisi examine the comprehensive strategy that begins with the establishment of the umma or Muslim community. The mosque becomes the locus of power, a strategic base and the center of all activities. They explain how in this embryonic phase, a top priority is the scouting for new arrivals to expand and empower the existing Muslim community. Muslim leaders offer solicitous assistance and helpful suggestions for schools, housing, mosque worship, halal markets and other services to ingratiate themselves with new arrivals and bring them into the local Muslim community. Agents of local mosques, ever alert for new immigrants and potential converts, engage in subtle forms of indoctrination and police local Muslims.

Read it all at Atlas Shrugs