UNHRC’s Navanethem Pillay and the OIC’s Ihsanoglu
We have so much in common, and so much to talk about
The Tundra Tabloids was on the road over the last two day when this came in the email box, David G.Littman kindly asks for it to be published here as well. So, Here is a portion of the text, with a link to Jihad Watch to view the rest. The UNHRC is basically working for the Organization of the Islamic Conference, so watching the wheeling’s and dealings between these two international organizations is of utmost importance. Thanks to David for his courageous diligence in continuously throwing a very hot spot light on them. KGS

Comments by David G. Littman, NGO Representative UN-Geneva: Association for World Education (AWE); World Union for Progressive Judaism (WUPJ):
I received an email this morning – indirectly – by an Arab Affairs Correspondent from an American news agency who was in the midst of, as she explained:
I’m writing a piece about the Organization of the Islamic Conference. Apparently the OIC is planning to set up a human rights division within its ranks, following a meeting between its secretary general and the UN high commissioner for human rights. I’d like to know what your opinion is of this move. Do you think this is a PR move? Is it too little, too late? Do you think this kind of commission can be effective and will bring about any changes in the situation of human rights in Muslim countries? Kindly get back to me as soon as you can so that I can quote you in a written item…you can see more details here.
One ‘click’ provided a glimpse at a fascinating meeting at the OIC Headquarters in Jeddah, Saudi Arabia between OIC Secretary General Professor Dr. Ekmeleddin Ihsanoglu and UN High Commissioner for Human Rights Mrs. Navanethem Pillay (below). This was a clear follow-up to Ihsanoglu’s statement made seven weeks earlier at the UN Human Rights Council, which was quoted at length in our 19 April Jihad Watch piece: Let me conclude on a happy note.
* * * * *
Although our opinion was received “too late” to be used, it might be useful to share it with Jihad Watch readers worldwide, especially in view of the OIC’s very noteworthy information that: “The High Commissioner congratulated the Secretary General on the prospective establishment of the Commission and assured full support of her Office in its formative phase.” This is it:
Two days ago I posted a long piece on Jihad Watch (with a video) to enable people worldwide to ‘see’ what is happening at the Human Rights Council. I have copied below a few lines (in red) from my accompanying essay which quotes OIC Secretary General Ekmeleddin Ihsanoglu when he spoke at the 13th session of the HRC on 1st March 2010. You have my ‘opinion’ just below [it follows here without that quotation]:
* * * * *
To sum up, I’d recommend that delightful ‘story’ of the Emperor by Hans Christian Anderson when only a child dares say “The Emperor is naked.” – What the OIC will be offering to the world is a stark naked 1990 Cairo Declaration of Human Rights in Islam with Sharia-gate Human Rights ‘clothing’, all this as “a paradigm shift within the OIC” – and a panacea for human rights worldwide. When will the world finally ‘see’ that evident truth and cry out that the OIC is as naked as the fairy-tale Emperor? 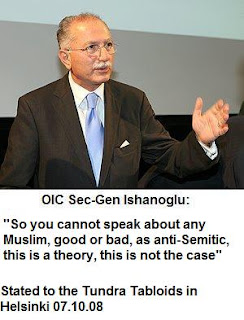