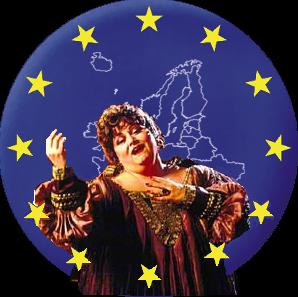 If this spells doom for the EU, so be it, it couldn’t come any sooner for the Tundra Tabloids. The demise of the EU, one of the, if not THE, most corrupt political construct in the modern age would be a much welcome result, and the TT wouldn’t loose a minute of sleep over it.
A superstate patterned after Brussels was doomed to failure, it was only a matter of when , not if. Who knows, they may still manage to blow life into its dead carcass like a butcher does to the hide of an animal, easier to skin it you know. So bye bye corrupt EU, the TT would gladly help dig the grave your sorry carcass  will be laid in once you finally give up the ghost. KGS
NOTE: No need to worry about Turkey since the handwriting is already on the wall.

The European Union (EU) has temporarily solved the crisis involving the euro, the EU’s common currency, by bailing out Greece. Temporarily, because no one believes the problems are over.
Greece, teetering on the brink of bankruptcy, is one of the 16 countries which use the common currency. To stop its financial problems from dragging the euro down, the 15 other eurozone countries worked out a €45bn emergency funding plan. They declared that they were prepared, together with the IMF (which is to guarantee a third of the sum), to give Greece a €30bn credit line if interest rates become too high for Athens to borrow the necessary funds on the financial markets. In return, Greece has promised to cut its budget by 10% of its GDP in the next three years. The deal has temporarily restored the markets’ confidence in the euro.
There are at least three reasons for skepticism.
First, it is simply impossible for Greece to cut its budget by 10% of its GDP in three years without having the option of devaluating its currency to make its products cheaper on the international markets. The Economist argues that the €45bn rescue plan has “merely bought time – three years, in effect, to contain the adverse consequences of a possible Greek default.” The magazine states, moreover, that Greece is in need of a rescue plan closer to €75bn.
Second, Greece is not the only eurozone country facing default. The budgetary situation in the other PIGS (Portugal, Italy, Greece, Spain) and Ireland is equally precarious; that in France and Belgium is not much better. How are countries which might soon need help themselves, expected to help Greece? The blind cannot lead the blind. The main reason why France and Belgium agreed to help Greece is because they count on receiving help themselves when in need. Everyone, however, is expecting help from the same country: Germany.
The German newspaper Handelsblatt commented bitterly: “For the Germans it is no longer a question of whether they must pay, but how much.” Public opinion in Germany is just as embittered. Joachim Fels, head of research at Morgan Stanley, warns that the Greek debt crisis is setting off a chain of events that may prompt German withdrawal from the eurozone. “Obviously, we have not reached the end game yet. However, with the latest developments, such a break-up scenario has clearly become more likely,” he wrote in a note to clients.
George Soros even thinks that not just the euro, but also the EU itself risks breaking up. “The Germans have always made the concessions needed to advance the European Union, when people were looking for a deal. Not anymore,” he told the Italian newspaper Corriere della Sera. “That’s why the European project has stalled. And if it can’t go ahead from here, it will go backwards. It’s important to understand that if you don’t make the next steps forward for the euro, the euro will go to pieces and the European Union, too,” he said.
Third and most important, however, is the basic flaw of the euro project. It is economically flawed because it is politically flawed, and it politically flawed because, as the Dutch professor Jaap Koelewijn pointed out, it is culturally flawed. The euro is doomed to fall because of insuperable cultural differences.