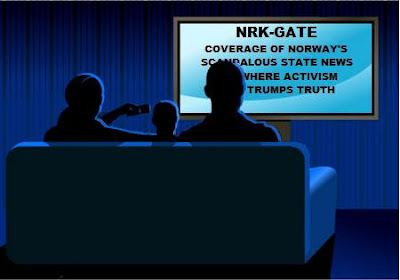 The Tundra Tabloids has recently cast its sights on the self labeled “small giant” in Scandanavian broadcasting, Norway’s state tv, NRK. The anti-Israel antimosity within it’s news department is more pronounced than that of Sweden’s (SVT) and of Finland’s (YLE) state broadcasting organizations, and that’s saying a lot.
So, in light of the recent spike in high profile instances of ridiculous journalistic tomfoolery by a member of the NRK organization (now known as NRK-GATE), the TT would like to show a couple of other examples of NRK “activist journalism”, which has long become an institutionalized organizational policy, and their response to the criticism. KGS

Quite seriously, when will this with Jew-hatred end? I am very tired of comments like “fucking Jew” and “Jew stopped.” When I told my grandmother that someone said such things to me in school, she was beside himself. I almost thought she would faint. Little did she how much Jew hatred in Norway has evolved.

The other day I was in a Bar Mitzva (comparable to a Christian confirmation), and relatives from several countries came to celebrate. My grandmother’s siblings were too weak to go to synagogue. They went to a taxi and the driver asked where they should. The man came from the Middle East, and would not run them at synagogue. They were bewildered, but went to the next taxi. The same thing happened. This is unbelievable!

Little did she how much Jew hatred in Norway has evolved.

I’m not Jewish, but my dad is. What’s the point of constantly asking me “is not it your father is a Jew?”. Several times I found excuses to go home earlier from school, because I can not bear to cry in front of others.

1.) Norway’s Most Violent Anti-Semitic Riots Ever: It has now also emerged that one of the out-of-town participants in the pro-Israeli demonstration of 8 January 2009 was maimed for life. Jon Gunnar Aksnes related that he had been beaten with a flagpole, and subsequently by another gang with truncheons. When he went back to his bus, bleeding, a reporter for the notoriously anti-Israeli state television NRK saw that he was hurt and had the camera turned on him. When he told them who had attacked him, the reporter rapidly had the camera turned away.
2.) 2001 – Norwegian Branch takes on Anti-Israel Media – As the violent Palestinian upris­ing continued over recent months, members of the ICEJ Branch in Norway became alarmed at the increasingly bold and brutal anti­Israel bias in the Norwegian media ­described as “the worst in Europe.” Under the leadership of our Norwegian representative, Leif Wellerop, the ICEJ decided to speak out publicly against this imbalanced reporting by organising a demon­stration of both Christian and Jewish groups on June 16 outside the Norwegian Broadcasting Corporation (NRK) building in Oslo.
[…]
As a rule, Norwegians are not the sort to stage protests. But for many, the situation had become intolera­ble. The mobilisation against Israel of NRK – the main, government­sponsored Norwegian TV and radio channel – was closely documented by Odd Sverre Hove, the editor of the newspaper Dagen, read by many Christians throughout the country. His review of NRK coverage over several months exposed a daily media slant heavily in favour of the Arab side, which Hove published in a series of articles in his paper. When NRK and other Norwegian media refused to acknowledge or address this disparity, hundreds of Norwegians decided it was time to take to the streets.
In what was the first protest of its kind outside the state broadcasting facilities in Oslo, some 800 Christians and Jews gathered on a bright, clear Saturday on the steps of the NRK broadcast building to voice their displeasure. “We came home victorious,” reports Wellerop, who spoke at the rally along with Hove and Kaare Kristiansen, an elder statesman in Norway who resigned his position on the Nobel Peace Prize Committee when it awarded the prize to PLO chief Yasser Arafat in 1994. An official with the Israeli Embassy in Oslo was also on hand to thank the participants on behalf of the State of Israel.
The head of the news depart­ment for NRK Television was also present observing the demonstra­tion. Wellerop was able to speak with her directly about his concerns, but she continued to maintain that Norwegian TV has nothing to be ashamed of.
[…]
In a more recent development, ICEJ-Norway filed a complaint with the special review board that moni­tors journalists according to profes­sional standards. The complaint involved an interview by an NRK-TV reporter of Israel’s deputy Foreign Minister Michael Melchior, who is the former Chief Rabbi of Norway and Denmark. Rabbi Melchior was asked to join in the complaint, which he quickly did, citing his own objections to the unfair treatment he received during a prime time, nationwide broadcast. Needless to say, Wellerop reports that he senses a real “nervousness” within NRK that they will be formally reprimanded through this process.