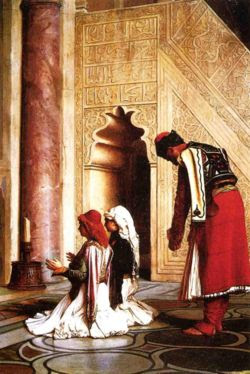 Gee, why would a dhimmi Greek object!
Quote: “…and we all know from the history books the Greeks don’t like being put together with their longtime rivals the Turks.”
The Greeks know what it was like to be ruled by the musulman, and justifiably so, being grossly taxed by the Ottomans, (the dhimmi tax) and their children stolen to serve as Muslims in the Ottoman army:

“Greeks also paid a land tax and a tax on trade, but these were collected irregularly by the inefficient Ottoman administration. Provided they paid their taxes and gave no trouble, they were left to themselves. Greeks, like other Christians, were also made to pay the jizya, or Islamic poll-tax which all non-Muslims in the empire were forced to pay instead of the Zakat that Muslims must pay as part of the 5 pillars of Islam. Non-Muslims did not serve in the Sultan’s army, but young boys were forcibly converted to Islam and made to serve in the Ottoman military.”

So, there is every good reason for this Greek to be totally pissed off that his picture was being used to sell “Turkish yogurt”. KGS
H/T Henrick 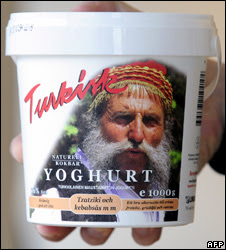 Imagine your surprise when you walk down the dairy products aisle, you want to reduce your blood pressure or become thinner or do whatever else; you decide to pick up yohgurt (ah the healthy food that’s been with us forever) and then you get the biggest shocker of your life: your face is on the yoghurt cups.
It’s what happened to a Greek man who, contrary to his face on the yoghurt must have had a very irritable expression instead of a smiling one, found out through his friend Anthanasios Varzanakos in Stockholm, Sweden who phoned him telling him about his surprise when he saw someone he knew on a foods product.
“Yoghurt Man’s” friend, Athanasios Varzakanos: “I was surprised and I could not believe my eyes. It was a shock to see him there suddenly, someone I know. He didn’t like it, he was upset and wondered how it had happened.”
The yoghurt is made by Lindahls Dairy in Jonkoping, Sweden based on a Turkish recipe.
The Greek man featured on the yoghurt containers (his name was not given) immediately handed in a 40-page legal complaint that accused the dairy of falsely using his image in a Turkish context, specifically displayed as a traditional Turkish farmer…and we all know from the history books the Greeks don’t like being put together with their longtime rivals the Turks.
Naturally, the dairy’s chief executive Anders Lindahl was baffled and stated in an AFP interview that the dairy had “bought it from a photo agency, so we assumed that everything was in order.”
Well apparently not, the Greek man has sued Lindahl for approximately 6.9 million U.S dollars, an equivalent to 50 million Swedish kronors. This is either a very late April Fools or it’s simply one of those bizzare events that worms into our lives once in a while… Ah, life.
Luckily, this could not have come at a better time for the mysterious yoghurt man when Greece is going through all those riots over austerity measures.