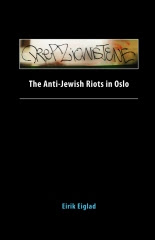 2009: Norway’s Most Violent Anti-Semitic Riots Ever
The Anti-Jewish Riots in Oslo, by Eirik Eiglad, Communalism, 2010, 103 pp.
Reviewed by Manfred Gerstenfeld
This small book – an essay of about twenty thousand words – describes a situation in 2009 about which the author says:
As far as I can judge, these were the largest anti-Jewish riots in Norwegian history. Even before and during World War II, when anti-Semitic prejudices were strong, public policies were discriminatory, and the Nazified State Police efficiently confiscated Jewish property and deported Jews on that despicable slave ship SS Donau – even then, Norway had not seen anti-Jewish outbursts of this scale. This country had no previous history of wanton anti-Jewish mass violence. (67)
The book covers a period of four days – 8-11 January 2009 – and also includes some later reflections about what Eiglad witnessed. In the first paragraph he writes: “I never thought I would live to see anti-Jewish riots in the Norwegian capital.” The author, who lives outside Oslo, notes that he writes from a leftist perspective: “I am a social-ecologist, believing in direct democracy, the Enlightenment and a libertarian form of socialism” (9).
Eiglad also mentions that, through two left-wing bodies, Blitz and Anti-Fascist Action, he had participated “in mobilizations against neo-Nazis and other fascists in Sweden, Germany, Denmark as well as Norway. I’ve engaged in street fighting” (41).
As the anti-Israeli incitement in Norway by much of the so-called “progressive elite,” the anti-Semitism there, and the hate manifestations get little attention abroad, it is best first to relate the essence of the author’s story. Eiglad was visiting Oslo on Thursday, 8 January, a cold day with icy winds, when two demonstrations against the Gaza war took place. There was also a pro-Israeli demonstration; the participants were gathered in a fenced-off area, protected by the police, while Hamas supporters were throwing bottles and small rocks at them (18).
Eiglad, who was standing outside this area, was attacked by a number of what he calls “first- and second-generation” immigrants who thought he was pro-Israeli or, even worse, a Jew. It is not considered politically correct in Norway to be more precise and call the attackers “violent Muslims.”
Later the author watched a demonstration in “favor of peace,” in which about ten thousand people participated. Some of them shouted “Kill the Jews” or “Slaughter the Jews” in Arabic. A leaflet handed out suggested that people “empty their trash outside the synagogue” and “place pig heads on the cemetery.” The chairperson and the rabbi of the Jewish community, Anne Sender and Yoav Melchior were insulted and left the gathering (31-32).
After there were calls to burn the Israeli embassy, a number of demonstrators went over to the building but found it heavily guarded. They then smashed the windows of a nearby beauty salon that belongs to a well-known homosexual (35). In addition, several pro-Israeli people were beaten up or injured. Eigland titles the chapter dealing with that Thursday, “I Have Seen the Future.”
He relates that the next day, the daily Dagbladet’s website showed a video of youths kicking to the ground a seventy-three-year-old man, Sverre Martin Haug, who was carrying an Israeli flag, while shouting “Bloody Jew – get him!”[1] Two young Muslims rescued Haug, and the other Muslim youths stopped attacking him because they realized that he was a non-Jewish Norwegian (32).
Two days later a pro-Palestinian demonstration took place. In addition to Muslims, many socialists also participated. Kristin Halvorsen, the leader of the Socialist Left Party, who was then finance minister and is now education minister, was also present. Eiglad says that when he passed her she was standing close to somebody with a placard proclaiming “The greatest axis of evil, USA and Israel.” Pictures documenting this have since appeared in several dailies.[2]
MORE HERE.