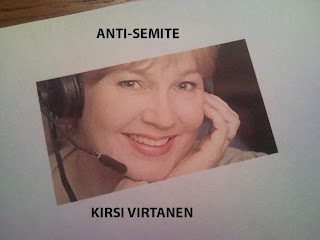 Oh, I’m not anti-Semitic, just a
habitual demonizer of the Jewish state!
NOTE: Virtanen’s name in Finnish means stream (or little stream), which is actually very fitting for this particular radio personality who broadcasts streams of vitriolic anti-Semitism under the guise of criticism of Israeli policies.For those Finns who agree with the TT, please consider writing a letter of complaint to the JSN here.
This woman is evil. She knows what she’s saying is totally false, but that’s her gig, sticking it to the Jewish state, and all on the taxpayer’s expense with no one to fact check her. That’s the power of the state run media, it could care less whether or not what the woman is saying is true, as long as it dovetails with their political world view of Israel, who cares about the facts.
Mind you. this is just the beginning of her 45 minute taxpayer funded tirade against Israel, where she falsely states that Israel beats and tortures children, steal homes, water, food and yes, work from the poor Palestinian Arabs. This far Left loon of a woman is a total digrace, but the folks at YLE love her.

Kirsi “the Stream of Bile” Virtanen belches up the following:

What should you do with a child that throws stones? Don’t bother your head to ponder it, the Israelis have already solved the problem, stone throwing children, whether they are 12 years old or 17 years old are sent to jail. But before they are taken to jail, beaten and tortured, and before they are beaten and tortured, they’re taken from their homes in the middle of the night without telling their parents or to the children what’s the charge.

I think it’ll would be poetic justice if someone hired a bunch of Somalis to pelt her house, car and herself  with stones 24/7, (because we all know that the Somalis are treated so bad in Finland, being randomly taken from their homes and beaten within an inch of their lives by the racist Finnish police) and then see if she gets tired of it all and calls the racist police, and whether they place these habitual rock throwers into dentention

And before I get started, I want to say that I’m not a Judeophobe, nor am I of the opinion that all Israelis are like what this program is going to report about, but anyways, many are, and in the eye of the Palestinians, terrifying.

What do we think when say that a county is a civilized state? I believe that we are both, you and I, of the opinion that a state which murders the people of another state secretly abroad, does not deserve to be labeled a civilized state. Also a state that puts children into jail for throwing stones is not a civilized state.

More than likely Kirsi Virtanan roots for the murderous Hamas to kill more Jews, and then passes out sweets to her neighbors when they’re successful. She propbably has posters of suicide/homicide bombers plastered all over her apartment walls.

A state that takes the homes, water, food and work from the people of another neighbor state, is not a civilized state. What name do we call such a state that does that? The answer is surprisingly easy, we call it Israel.

No, we call them the Arab League, who kicked out over a million Jews from their homes, and we also call them the Muslim Arabs from the disputed territories who habitually victimize, terrorize the Christian minority in their midst, driving them from their homes, turning the once 80% Christian majority in Bethlehem, into a 20% minority, with the numbers of that hapless community still bleeding. The anti-Semite Kirsi Virtanen could care less about that, unless she could pin it on the Joooos.

Just a few weeks ago, a Hamas leader was murdered in Dubai, newspapers from all over the world wrtie that it was the work of the Israeli Mossad. […] I was interested so much in finding out as much as possible that I followed what was reported in the international press. I had wanted to a program about Israel for such a long time, so this presented itself as a golden opportunity.

That is the only truthfull thing the bigoted Virtanen spoke the entire 45 minute soft spoken but highly vitriolic rant. Finnish state radio YLE shold be ashamed of itself for promoting such demonization of another state, but this is all par for the course folks. If not for the Tundra Tabloids reporting on this outrageous crap, no one on the outside would ever know what passes for normal here. KGS
NOTE: Check out Honest Reporting’s report on the credibility of Palestinian sources, it’s something that the TT reported on earlier. Since The Official Voice of Anti-Semitism of the Finnish Airwaves, Kirsi Virtanen has once again launched a diatribe against the Jewish state, the TT thought it prudent to repost something about it once more.
NOTE: The Woman also dares to add in her radio broadcast that she has never seen an act of anti-Semitism in Finland. She should be re-directed to her own broadcast.