Skip to content
Home
/
2010
/
April
/
3
/
Finnish Supreme Court
/
WHEN FINNISH POLITICIANS AND A LONE SUPREME COURT JUSTICE DISAGREE WITH A SUPREME COURT DECISION THEY INVENT NEW LEGISLATION TO CIRCUMVENT IT…….
Facebook
Twitter
Google+
LinkedIn
Pinterest
It is one of the more incredible stories currently going around Finland these days. The chief justice of the Finnish Supreme Court is actively working against the Finnish legal system (read = willingly breaking the law) in order to act upon “new legislation” presently being cooked up the president and prime minister in order to circumvent a Finnish statute on what constitutes an immediate family.

Finnish Supreme Court:
In Finland we rule by fiat
Welcome to the Finnish version of the USSR. The situation involves a story the Tundra Tabloids reported early on, concerning an Egytpian Copt grandmother who has overstayed her visa and wants to remain in Finland. Finnish law does not reconize the extended family as the “immediate family” and the immigration dept. and courts have subsequently demanded for her deportation from Finland back to Egypt.
Like the TT has said before, this happens to be one of those situations that you actually feel sorry for the person involved, and would have no problem letting her stay in the country. She poses no risks, comes from a country that openly discriminates against their Christian minority, even to the point of inflicting pogroms. But the problem lies in the fact that any such ruling allowing this good Christian person to stay, will open the floodgates for immigrant Muslims and their large extended families which will burden an already over burdened system.
As difficult as the situation is, one has to draw the line somewhere, and that line has already been drawn in the Finnish law books, until now. When the politicians disagree with laws on the books, they make the rules up as they go along in order to suit their own ideological world views, and damn the Finnish people.
Lets put it this way, the Finnish people were never consulted about the issue, here they rule by decree with the help of the Chief Supreme Court Justice. Ahhh, breaking the law made simple. TT contributor Kumitonttu fills in the details. KGS

This is a long and complex story, but I try to keep it short and simple.

French philosopher Montesquieu wrote (ANONYMOUSLY!!!) a concept of three instances running the state. First is the one making laws, second is the one making judgments and third the one launching them in practise.
That means, no law shall be written to over turn a decision made by court. If the court has given its decision, the police must execute it. What happened with the grannies from Egypt and Russia is, that Halonen and Vanhanen said the government will make a new law that will make it possible for the grannies to stay in Finland. Now, that is obviously wrong, because the government does not make laws but the parliament. KHO (Finnish Supreme Court) made its decision by voting and the result was 7-1 that the granny must be repatriated from Finland to Egypt. The president of the KHO, Pekka Hallberg, was alone in supporting her staying in Finland.
After the Halonen/Vanhanen statement, the president of Korkein Hallinto-oikeus (KHO) Pekka Hallberg wrote a letter to the police and commented that the decision of the KHO must not be executed because there will be a new law. Hallberg of course was not in a position to give commands to the police, was he? After the letter, police actually stopped the execution of the decision. After that, Pekka Hallberg has consulted the oikeusministeriö how the law should be rewriten.
So in short: Pekka Hallberg, from his position as chief justice, has made judgments to both execute the judgments as well as to write the laws. What we are talking about here is a revolution. In Soviet Union the courts didn’t have to wait laws when punishing the citizens because it was automatically always right. If something “wrong” wasn’t illegal it only meant that the parliament had NOT YET made it illegal and therefor the court had the right do so.
I have always said to you, that if there will be any actions that threat the democratic processes and institutions, it will not be the conservatives but the progressives, that is the left.
We have come to the situation in which the majority of the people are against the current immigration policy which opens the doors to Muslim culture, and even so the social democrats (Hallberg and Halonen) can’t keep their hands tied but will turn down the whole concept of ruling the democratic state.

NOTE: The blog by Jyrki Virolainen (in Finnish) provided the brunt of the material for the story.

UPDATE: Even the Finnish Attorney General, Tuija Brax is in on the fix. 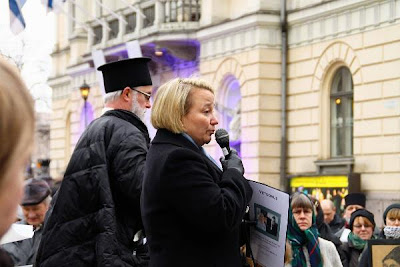 So the Finnish government, President, Prime Minister, Attorney General and the Chief Supreme Court Justice (lone dissenting voice against the grannies deportation) are running over the Finnish constitution, it’s laws and the justice system. Great age we live in. 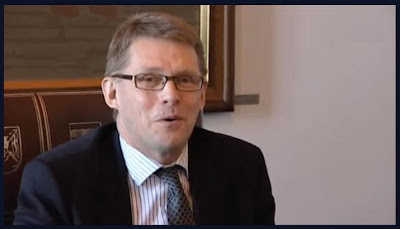 On Friday last week, namely 25.3. A-talk broadcast showed a film clip of the Egyptian grandmother’s son and the son-inlaw of the Russian grandmother going to meet the Prime Minister Matti Vanhanen at the Government Palace.
The Prime Minister explained to the delegation, that he can not take a position as prime minister and cannot criticize the Supreme Administrative Court recent decision, “at least not when the camera is turned on.” This he (Vanhanen) when he glanced significantly towards the camera and laughed, which reflected  his derision and contempt.
The message was clear: in fact the Prime Minister fails to respect the Supreme Administrative Court’s final decision every step of the way. As an elitist, he at least wanted to give viewers a signal to read between the lines.