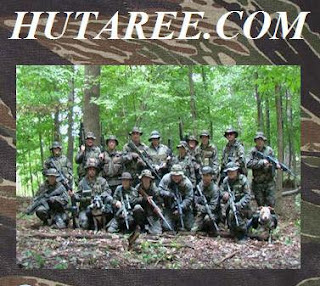 At this present time, there isn’t any information available on the exact reasons why the Feds, Homeland Security and various law enforcement officials raided the militia camp Hutaree, in Adrian Michigan. Is this a case of timing the raids for political reasons, (update: This was a justifiable action by the Feds, the life of an officer(s) hung in the balance).
The Tundra Tabloids knows that these groups exist on the far fringe, are not approved of by any credible Christian denomination, but presently there isn’t any information made available about what lines were potentially crossed by them. If there were any plans for violence, then the government was correct in their actions, but what about the well known camps of jihadists scattered around the US? These militia groups are an embarrassement, just read their website, but are they actively involved in planned acts of terrorism? That remains to be seen. KGS

TINSC comments: “These Christian militia groups have existed for a long time and are very dangerous. I pointed this out some time ago when CNN televised their “Gd’s Christian Warriors” report on religious extremism. In that report, Christian Amanpour told America that “Gd’s Christian Warriors” were Evangelical Christians who went to Christian colleges and love Israel. Nowhere in that report was there mention of genuine Christian extremists to be found in the Christian Identity Movement, the Christian Militias, KKK etc.
Now we have a raid on a Christian milita and too many people think there’s no such thing. Thanks to the LIB media, Americans are uninformed about true Christian extremism. Rather, we’re led to believe that law-abiding Evangelical Christians are “the bad-guys”.

KGS: Also an important point to understand is that the right wing crazies can be seditious; but if you accuse left wing or Islamic groups of being seditious, you are engaging in McCarthyism. However this is pretty clear cut and will provide a useful precedent.

Atlas spells it out: “In a word, nuts. Seven people have been arrested for allegedly selling pipe bombs in Michigan, Ohio and Indiana, Fox News has learned. How about raiding Homegrown Jihad: The Terrorist Camps Around the U.S.? Was the armed camp in New York, Islamberg, raided? The Muslim Brotherhood (CAIR) is already crowing about it. Amidst record levels of Islamic terrorism in U.S., FBI raids Christian militia groups.

UPDATE: Most of the members to this cult militia group were from the same family, als notewiorthy is that they were intent on targeting the US government. These people are real whackos.
Indictment: Militia members sought to ‘levy war’ against U.S.

“Although there had been reports the Hutaree may have targeted Muslims, there is no mention in the indictment of any threats against them.”

At least seven people, including some from Michigan, have been arrested in raids by a FBI-led Joint Terrorism Task Force in Michigan, Ohio and Indiana as part of an investigation into an Adrian-based Christian militia group, a person familiar with the matter said.
The suspects are expected to make an initial appearance in U.S. District Court in Detroit on Monday.
On Sunday, a source close to the investigation in Washington, D.C. confirmed that FBI agents were conducting activities in Washtenaw and Lenawee counties over the weekend in connection to Hutaree, a Christian militia group. Detroit FBI Special Agent Sandra Berchtold told The Detroit News the federal warrants in the case are under court seal and declined further comment.