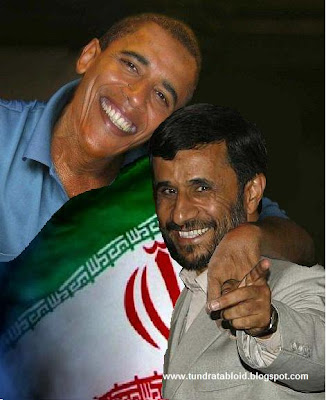 Moody: Keep your eyes focused on the Jews Hussein
Barry Rubin has another timely piece. George Bush was eviscerated by the Left for “taking his eyes of Afghanistan by invading Iraq. The charge was ignorance as best and dishonest at worst, but nonetheless, the charge stuck to the president, in large part, through the politics of the lefist media.

So where is the media now concerning the points Barry Rubin deftly raises in his recent article the Tundra Tabloids publishes in part. Where is the media now in raising the flag of concern over the fact that Iran is helping the Taliban that are still a part of the overall war effort (read =global jihad) that al-Qaida is waging against the West and those states aligned with it? KGS

The United States is at war with al-Qaida. Al-Qaida carried out the attack on the World Trade Center that killed 3,000 Americans. Al-Qaida is killing Americans in Iraq and elsewhere. So one would think the fact that al-Qaida has found a powerful ally would be a big story in the American media and by a big priority for setting off U.S. government anger.
And this would be especially so if that was explained by one of the most respected men in the country, a man who has access to the highest-level intelligence.
Not at all.
In the same testimony which created lots of discussion regarding remarks on the Israel-Palestinian issue, General David Petraeus, head of the U.S. Central Command, revealed a bombshell story that has been ignored: Iran is helping al-Qaida attack Americans.
Iran, he said in military-speak, provides “a key facilitation hub, where facilitators connect al Qaida’s senior leadership to regional affiliates.” Translation: Tehran is letting al-Qaida leaders travel freely back and forth to Pakistan and Afghanistan, using its territory as a safe haven, while permitting them to hold meetings to plan terrorist attacks for attacking U.S. targets and killing Americans. While nominally Iran sometimes takes these people into custody, that seems, Petraeus says, a fiction to fool foreigners.
Oh, and Petraeus added that Iran also helps the Taliban fight America in Afghanistan. Regarding Iraq, the general explains, “The Qods Force [an elite Iranian military group within the Islamic Revolutionary Guard Corps] also maintains its lethal support to Shia Iraqi militia groups, providing them with weapons, funding and training,”
So, Petraeus pointed out that Iran is helping al-Qaida against the United States and also, at times, Shia groups as well though these have been more quiet lately. In effect, the Tehran regime is at war with the United States. Yet this point is not being highlighted, nor does it stir rage in the hearts of White House officials or strenuous attempts to counter this threat.